Tuxedo cats have a prominent bicolor pattern. Their appeal comes from the stark black-and-white contrast of their coat combined with the pattern, which is reminiscent of formal wear for men. Any combination of the black-and-white pattern qualifies as a tuxedo, but generally, the body is black and the chest and paws are white. Other bicolor cats are not commonly called tuxedo cats and they may be red (orange) and white or blue (gray) and white. Because the term isn't strictly defined, you are free to call your bicolor gray-and-white cat a tuxedo if it exhibits this pattern. 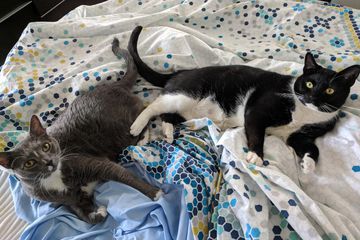 Tuxedo is a coloration pattern can occur in many different cat breeds. The bicolor pattern is noted in the breed standards for the American shorthair, British Shorthair, Maine coon, Manx, Norwegian Forest Cat, Scottish fold, Turkish Angora, and Turkish Van. It is not allowed in some breed standards.

The tuxedo pattern is named after the attire human men wear for formal occasions. Nothing is so dramatic as seeing a "tuxie," as it is affectionately called, dressed in its best bib and tucker. Some tuxies also wear "spats," or white boots. Tuxedo cats are truly the gentlemen of cat color patterns. Female tuxedo cats are just as common as there is no gender conflict here.

Other variations on the tuxedo theme include a white striped nose and the "masked tuxedo," with white around the chin and nose or white tips on the nose. Another variation infamously called the "Kitler" features a white "mustache."

Coat and Color: Black body, white chest, and paws may be white. There may be white patches on the face. They may be longhairs or shorthairs, depending on their breeds.

Life Expectancy: About 15 years, but possibly more for indoor cats

Characteristics of the Tuxedo Cat

History of the Tuxedo Cat

Cats have color genes that can produce the tuxedo pattern in the right combination. Tuxedo cats have the genes to be black. They also have the white spotting gene (S), which masks the black color on some parts of the body. It does this by preventing the color-producing melanocytes from migrating to those areas. The spotting gene produces different grades of white spotting, from 1 to 10. Tuxedo cats fall into the low grades from 1 to 4. The lower the number, the less white is seen.

When this gene combination began to be expressed in cats isn't known. It dates back at least to the Egyptians, as bicolor cats have been identified in their tombs.

Tuxedo cats are also called Felix cats after Felix the Cat, a character created during the 1920s silent film era. Felix was featured in cartoons, animation, and assorted merchandise. Even today the Felix clock, with its long black tail wagging back and forth, is a favorite cat collectible. Although the true creator or creators is a matter of dispute, Pat Sullivan owned the rights to the Felix character during his lifetime. Felix is all black except for a white chin (and very large white eyes).

Sylvester the Cat, of Looney Tunes, is another famous tuxedo cat. Sylvester has white jowls, a long bib extending down his belly, white feet, and a white tip on his tail. He is rather bottom-heavy, which makes his endless stalking of Tweety Bird in cartoons quite funny. Sylvester also talks with a lisp, while innocent little Tweety Bird talks baby talk, "I tot I taw a puddy tat sneaking up on me." Tweety can often be seen holding a sledgehammer behind his back, ready to strike back.

"The Cat in the Hat" by Dr. Seuss was published in 1957 featured a tuxedo cat. Collectibles from Dr. Seuss's favorite character are much in demand. The book was made into a 2003 live-action film with Mike Myers in the title role.

Socks, known as the First Cat during the Bill Clinton White House administration, was another famous tuxedo cat. But an even luckier tuxedo cat was one named Sparky who inherited more than $6 million in 1998.

You will know whether a cat has the tuxedo pattern from birth. Kittens are simply miniatures of the adult pattern rather than having a changing color pattern as they grow up.

You will need to take care of a tuxedo cat the same as you would any other cat of its breed. The coat requires no special treatment due to its color pattern. Brushing your cat will help reduce matting and may help prevent hairballs. Trim your cat's nails every two to three weeks and provide a scratching post.

Spay or neuter your pet by five months of age. Keep your cat indoors for safety. Be sure to stay up-to-date on veterinary visits and vaccinations to prevent common and serious problems.

Give your cat plenty of chances to play, chase toys, and safe places to retreat. Cats like lots of sleep and cat naps, so provide a comfortable bed and other places around your living area where your cat can lounge.

Indoor cats will need a litter box in a quiet area. Be sure to completely dump and clean the box at least once a week. Using clumping litter and scooping out the clumps daily can keep things tidy.

A tuxedo cat can be from many different breeds, some of which are more prone to particular diseases and conditions. The ASPCA lists these common cat diseases as ones you will need to be aware of for any cat:

Your tuxedo cat should be fed the same diet as any other cat of its breed. While it may be dressed to the nines, your cat doesn't need to dine on caviar. A wet food diet is often considered best, but you can leave out dry food for your cat to snack on as well. Discuss your cat's needs with your veterinarian, especially if your cat has diabetes, is obese, or is older. Provide fresh, clean water for your cat at all times.

Be sure to research your cat's breed before you decide as to whether a tuxedo cat is right for you.

Here are some other coat patterns for cats:

Watch Now: Why Do Cats Purr?