The Alaskan Klee Kai is a tiny dog that looks just like a miniature Husky but was developed only in the 1970s by crossing a Husky with smaller breeds. High-energy and alert, this breed is quite the handful compared to similarly sized toy dogs. Like many other northern breeds and small dogs, the Alaskan Klee Kai is quite the barker. These dogs can be suspicious of strangers but tend to bond closely with their owners. Smart and watchful, these little dogs are adept at learning tricks and keeping their owners entertained.

Characteristics of the Alaskan Klee Kai

History of the Alaskan Klee Kai

The Alaskan Klee Kai is one of the “youngest” dog breeds around, tracing its origins back to a single woman, Linda Spurlin, who worked to create a companion-sized Husky starting during the 1970s after spotting what looked like a miniature Husky in Oklahoma.

Rather than breeding extra-small or dwarf Huskies to create a small breed (practices that often result in unhealthy dogs), Spurlin “outcrossed” Huskies with smaller breeds like Schipperkes and Alaskan Eskimo Dogs. Spurlin originally called the breed simply “Klee Kai,” which means “little dog” in the Inuit language. In 1995, the name was changed to Alaskan Klee Kai.

This breed is still considered a rare breed and is not recognized as a separate breed by the American Kennel Club. The United Kennel Club recognized the Alaskan Klee Kai in 1997.

From day one, the purpose of the Alaskan Klee Kai has been to be a cute, active companion for owners. Unlike the majority of older dog breeds, these little dogs were never meant to be hunters, farm dogs, guard dogs, or anything other than a companion. However, that doesn’t mean that they don’t enjoy “work” in the form of barking at strangers and training games!

The Alaskan Klee Kai has grown in popularity as people notice the appeal of a smart, active dog that still fits into a smaller living space. This has led to some less-than-skilled breeders selling poorly bred puppies with pinched faces and bulging eyes that look more like fluffy Chihuahuas than miniature Huskies. Supporting a good breeder is important to keep this relatively rare breed healthy going forward.

While they look just like miniature Siberian Huskies, Alaskan Klee Kais are not just shrunken Huskies. They can also be easily confused with the designer mixed breed “Pomsky,” a cross between a Pomeranian and a Husky. Alaskan Klee Kai were created by mixing Huskies with smaller, but similar-looking breeds such as Schipperkes and American Eskimo Dogs.

This resulted in a tiny dog that looks like a mini Husky but has additional traits (like the Schipperke’s desire to hunt mice) in the gene pool. All three of the breeds involved in Alaskan Klee Kais are bark-happy, thick-furred, curly-tailed, and pointy-eared. This breed is remarkably consistent in looks, despite being relatively new to the world.

This active little dog requires near-constant stimulation. Even active owners will find that Alaskan Klee Kai benefit from food-dispensing toys instead of food bowls. Like many active breeds, these dogs often exhibit “contrafreeloading,” where they actually prefer to play games to earn their meals! A bored Alaskan Klee Kai can easily become destructive or vocal, so it’s important to exercise both its body and his mind.

Alaskan Klee Kai are too small to join their human companions on long runs or bike rides, though hiking on-leash is a great idea. Instead, activity walks and training games are other great ways to burn off that Husky-like energy seen in these little dogs. Keep in mind that this breed can be difficult to train to come when you call, so keep yours on a long line if you’re not in a fenced area.

Grooming an Alaskan Klee Kai is not a small task, but luckily it isn’t quite as extreme as grooming a Maltese or Akita. Thanks to their small size, these dogs just don’t leave as much hair on the furniture as a larger breed. While their fur is thick, it stops growing at just an inch or two long. Brush them several times per week, taking extra care to work out mats near their collar or harness. Good grooming habits will also reduce how much hair ends up on your furniture.

Training these little dogs is often a joy. They’re quick to learn and smart as a whip, so be ready to keep up! Alaskan Klee Kai respond especially well to fast-paced, reward-based training games such as "Ready, Set, Down" after they’ve already mastered basic obedience training.

These little dogs can be exceptionally barky or shy around strangers. Focusing on rewarding the dog for behaviors that you like and building up skills that are important for the AKC Canine Good Citizen Test can help teach your Alaskan Klee Kai how to behave properly in public and at home.

Some of these problems are best avoided by finding a good breeder and ensuring that they do appropriate health testing. Once your dog is already in your home, you can ensure it lives a long and healthy life by focusing on consistent exercise and feeding high-quality food.

As an active little dog, Alaskan Klee Kai tend not to gain weight as easily as a lower-energy dog. Feed them an appropriate amount of high-quality dog food twice per day. They tend to do best when fed out of puzzle feeders rather than bowls, as this helps slow them down, exercise their brains, and burn off some excess energy. Avoid leaving food out all day, or your little dog will gain weight.

Get the advice of a veterinarian or canine nutritionist if you have questions about your Alaskan Klee Kai's diet.

What Is a Designer Dog Breed - About Hybrid Dogs 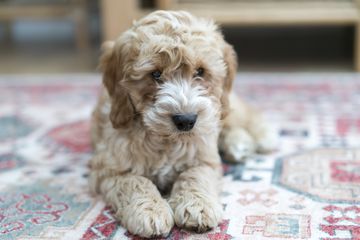 Where to Adopt or Buy an Alaskan Klee Kai

The Alaskan Klee Kai is a rare breed, so it's not likely that you'll come across one at a local animal shelter, though it's always worth checking in regularly to see if there's a dog available for your home. The Alaskan Klee Kai National Rescue aims to find homes for dogs that have been abandoned, abused, neglected, or surrendered by their owners. Other rescue groups that don't specialize in specific breeds may have Alaskan Klee Kais available.

Is a Klee Kai right for you? Before you bring home an Alaskan Klee Kai, you might want to explore some other similar breeds to compare their personalities and needs. Be sure to speak to owners, breeders, and rescue groups and meet a few Alaskan Klee Kai in person to learn more.

Otherwise, check out our other dog breed profiles. A perfect companion is out there for everyone!