Straight from the Swiss Alps comes the agile and versatile Appenzeller sennenhund. This medium-sized breed may look like a smaller and more compact Bernese mountain dog—which is also part of the sennenhund family, but this breed has characteristics all its own. Today the Appenzeller sennenhund is a relatively rare breed in North America but is more commonly found in Switzerland and greater Europe.

To better understand the Appenzeller Sennenhund, it helps to first understand the breed’s name. The term ‘Senn’ is a Swiss reference to herders, while Appenzell is a region in Switzerland. So sennenhunds are a group of dog breeds that were used extensively by Swiss herdsman. Due to regional differences, four separate breed entities arose under the term of sennenhund. The Appenzeller sennenhund comes from the Appenzell region of Switzerland and was used for herding animals, guarding farm property, and pulling carts.

Characteristics of the Appenzeller Sennenhund

History of the Appenzeller Sennenhund

The earliest origins of the Appenzeller sennenhund are largely unknown, but one theory is that sennehunds are descended from the ancient Molossus breed brought to the region by the Romans. These large, mastiff-type dogs were used for guarding livestock and may have given Sennenhunds their big bone structure and instinctive herding mentality. As discussed earlier, regional use and breeding of the Sennenhund gave rise to four distinctive types within the breed group, including the smaller but sturdy Appenzeller.

Despite uncertainty of the breed’s start, it’s well-established that the Appenzeller was part of daily life in the Alps by the 1800’s. In fact, the earliest published description of the breed is dated from 1853 and describes the breed as, “a clearly barking, short haired, medium size, multicolor cattle dog of a quite even "Spitz type", which can be found in certain regions and is used partly to guard the homestead, partly to herd cattle.” So from the breed’s early beginnings, it’s clearly evident that they were hardworking animals, equally capable of handling guarding and herding responsibilities.

In the late 1800’s, a forester from the Appenzeller region named Max Siber recognized the need for a breeding program and standard to preserve these special sennenhunds. In 1898, Mr. Siber brought the breed to its first international dog show debut and in 1906, the Appenzeller Sennenhund Club was founded and an official stud book was established. Despite being such a versatile working breed and a much-loved family companion, the breed has been slower to gain international popularity when compared to the Bernese Mountain Dog.

The Appenzeller became a recognized breed by the United Kennel Club (UKC) in 1993. It has Foundation Stock Service (FSS) with the American Kennel Club (AKC), which means that the organization supports the breed’s development efforts but it’s not yet a registered breed with the AKC.

Are you up for the challenge of caring for an Appenzeller sennenhund? These dogs can be delightful companions and tireless outdoor pals, but they require intellectual stimulation and an abundance of exercise.

The Appenzeller was bred for herding livestock and spending its days and nights outdoors guarding property in the Swiss Alps. As a result, these dogs are happiest when they have a job to do and can spend plenty of time in the fresh air. To channel their intelligence and energy, train these active dogs for sports like agility, weight pulling, obedience trials, and more.

If you have livestock or a large piece of property, they’re a natural fit for herding duties and guard dog patrol. You should know that the breed's guarded nature makes them to quick to bark at any perceived threat, whether it's warranted or not. They can be prone to barking to the point of becoming a nuisance, so be sure to put a quick stop to incessant barking over trivial matters.

Because of the instinctual desire to guard their turf, the Appenzeller can be suspicious of strangers. This breed is not overly friendly to new faces and requires early socialization, along with a proper introduction when you have company.

On the other hand, owners of Appenzellers find them to be very loving and devoted companions, even with children and other pets. Just be sure to clearly establish strong leadership to keep this smart canine from thinking that it has become top dog.

Exercise goes a long way in keeping the Appenzeller happy and healthy. As mentioned, these athletic animals are a good fit for any number of canine sports, but they’re also excellent hiking and backpacking partners. They’re surefooted with an athletic build and plenty of stamina for scrambling up trails or plowing through snow.

On a daily basis, your dog will appreciate a long walk or run, and playing fetch or with a frisbee in the yard. When properly exercised and appropriately challenged, the Appenzeller will be happy to lay at your feet or join you on the couch for a little rest and relaxation.

Keep in mind that these dogs were bred for life in the Swiss Alps, so their double coat makes them well-suited for cold weather and more uncomfortable in hot weather. Keep an eye on them when temperatures start to rise to avoid overheating.

You’ll also need to groom the short coat regularly, as it does shed considerably. Consistent weekly brushing with a slicker will keep stray hairs from becoming a serious problem. Shedding becomes even more noticeable with the change of season in winter and spring, so be ready to step up your grooming routine to keep the fur from flying.

The Appenzeller sennenhund is a hearty breed with few characteristic health problems. Of course, they’re not immune to common canine disorders and routine veterinary care is an important part of ensuring a long, healthy life for your four-legged friend.

Keep on the look-out for the following conditions:

Make your dog’s diet a top priority by feeding a high-quality and nutrient-packed food. Appenzellers aren’t known for having allergy issues or being picky eaters, but choose a formula with few fillers and high-quality protein sources. Keep this active breed on a regular feeding schedule, with an occasional treat for a job well-done.

15 Best Dogs for Hiking and Climbing 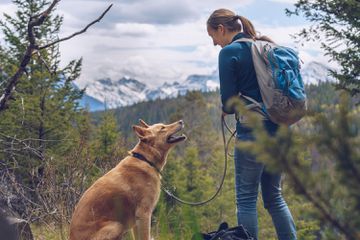 Where to Adopt or Buy an Appenzeller Sennenhund

While other Swiss exports (chocolate, anyone?) are readily available around the world, the Appenzeller sennenhund is a much rarer find. The breed has expanded across Europe, and there are also breeders in Canada and the United States—but they’re few and far between.

It can be difficult to locate and purchase one of these treasured pups, but it’s not impossible. Just be prepared to do some legwork to identify a breeder and to bring your puppy home. A good place to start is North American breed clubs.

Check out these resources:

Learn more about the Appenzeller by doing your homework on this breed’s temperament and energy needs. Check with dog clubs and learn about the interesting history of this beautiful and versatile sennenhund.