The best overall is the Casfuy Dog Nail Grinder

Our top choice is the Casfuy Dog Nail Grinder. We also like the Pet Republique Dog Claw Trimmer Kit, which includes both a grinder and a pair of clippers.

If your dog hates traditional dog nail clippers, you'll be happy to know there’s another option for keeping your dog's nails trimmed. Dog nail grinders are like a super-powered nail file that uses friction to shorten and shape your pup’s nails.

We conducted exhaustive research to find the best nail grinders on the market. 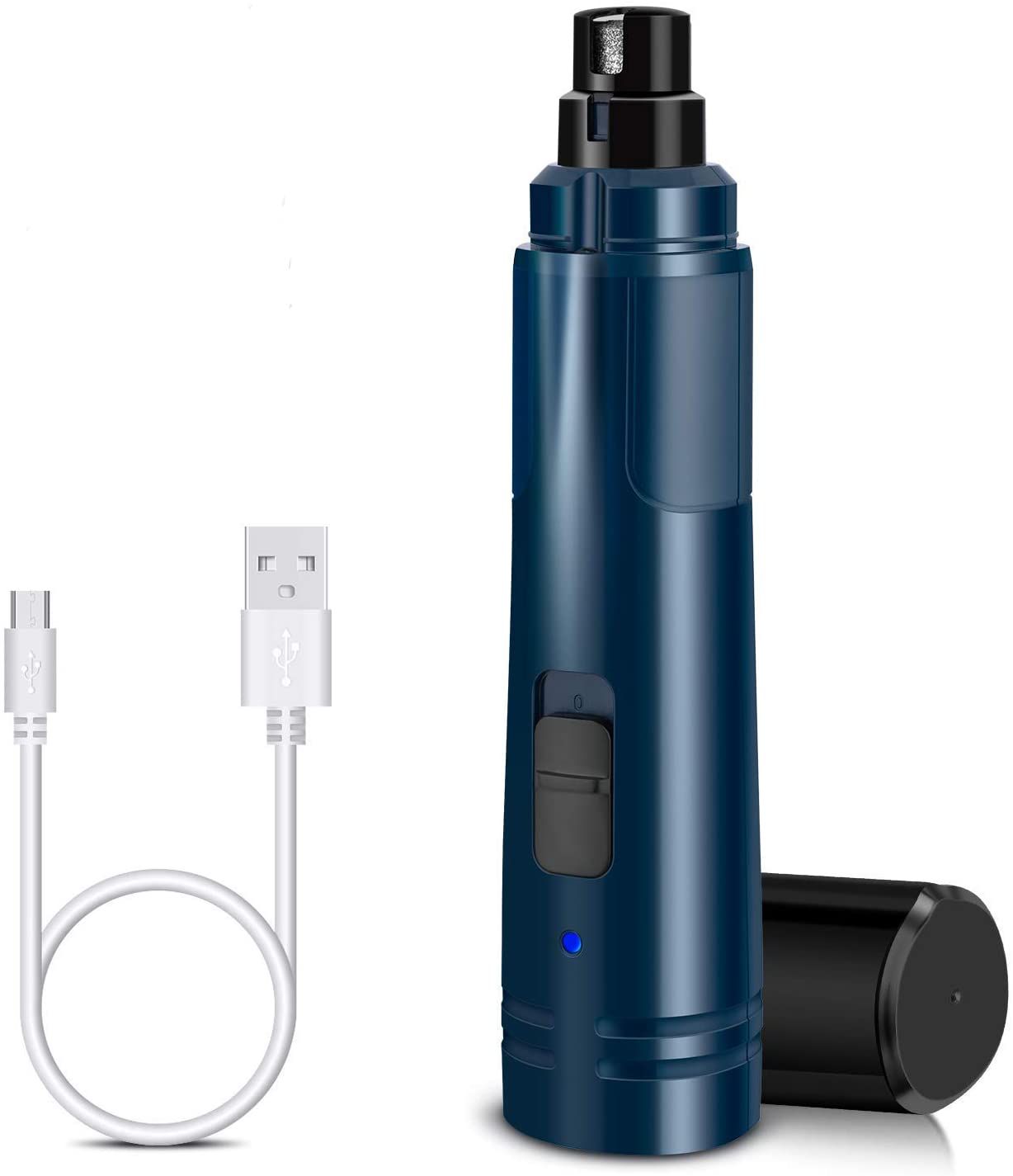 View On Chewy View On Amazon View On Walmart

The Casfuy nail grinder is our top pick because it is quiet, easy to use, and has a powerful diamond drum bit grinder that takes down even the thickest of nails. You can choose from two speeds and three ports, which makes it easy to customize the grinder to your pet's needs. Veterinarians and pet grooming professionals recommend it for novices and experts alike, thanks to its lightweight, ergonomic design that makes maneuvering a cinch.

Because it's cordless, you'll have to recharge it with the included USB cord. It holds a two-hour charge after three hours of being plugged in. 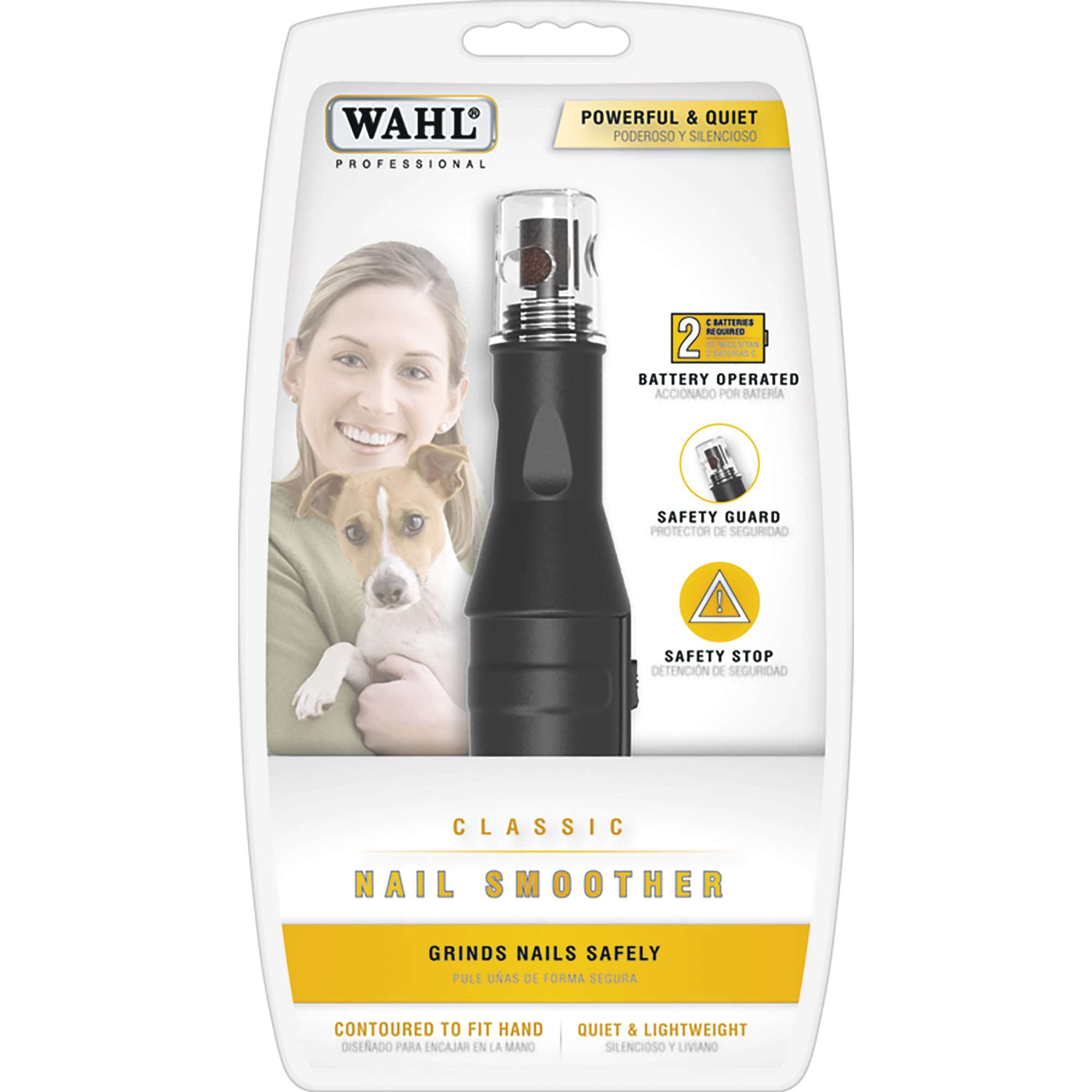 You get a lot for your money with this dog nail grinder from Wahl, a 100-year old company based in Illinois. That includes two large sanding drums and five sanding bands that are easy to change. The grinder is lightweight and easy to use and reviewers like that it’s battery operated. It has one speed: 5,300 RPMs, which is on the slower side compared to other grinders. The benefit is that it’s super quiet, while the downside is that it might take longer to groom all of your dog’s nails, especially if your furbaby is a larger breed. 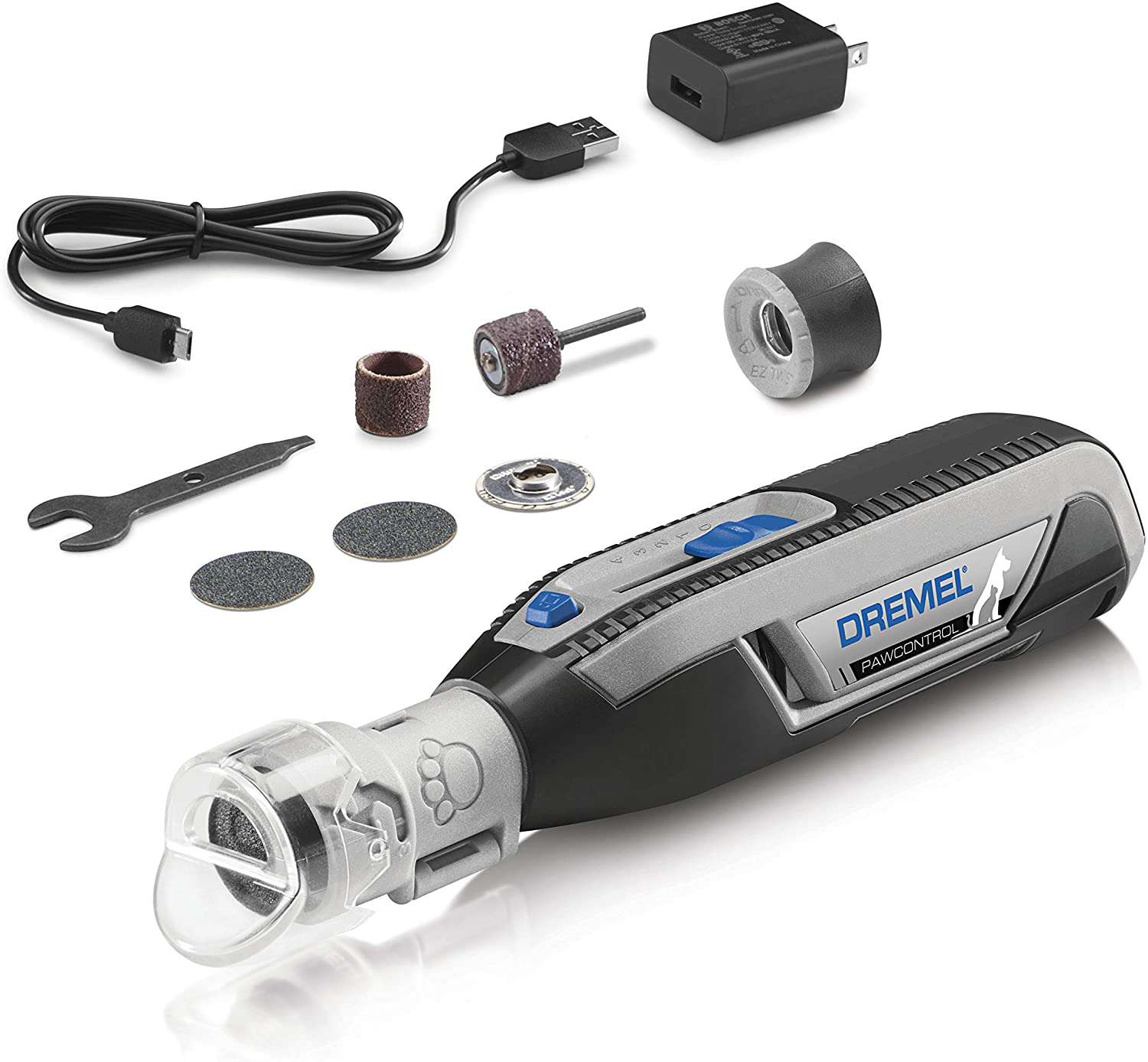 View On Chewy View On Amazon View On Lowe's

From the same Wisconsin-based company that makes some of your favorite rotary tools, this nail grinder offers four different speeds (ranging from 8,000 up to 25,000 RPM) to get the most precise cut. Its 45-degree angle prevents the likelihood that you’ll cut too quickly, while its clear cap nail guard helps capture nail dust for less of a mess. The grinder is cordless and has an ergonomic design, so it's easy to control and handle. Just make sure to start at the slowest speed, then work your way up as needed. 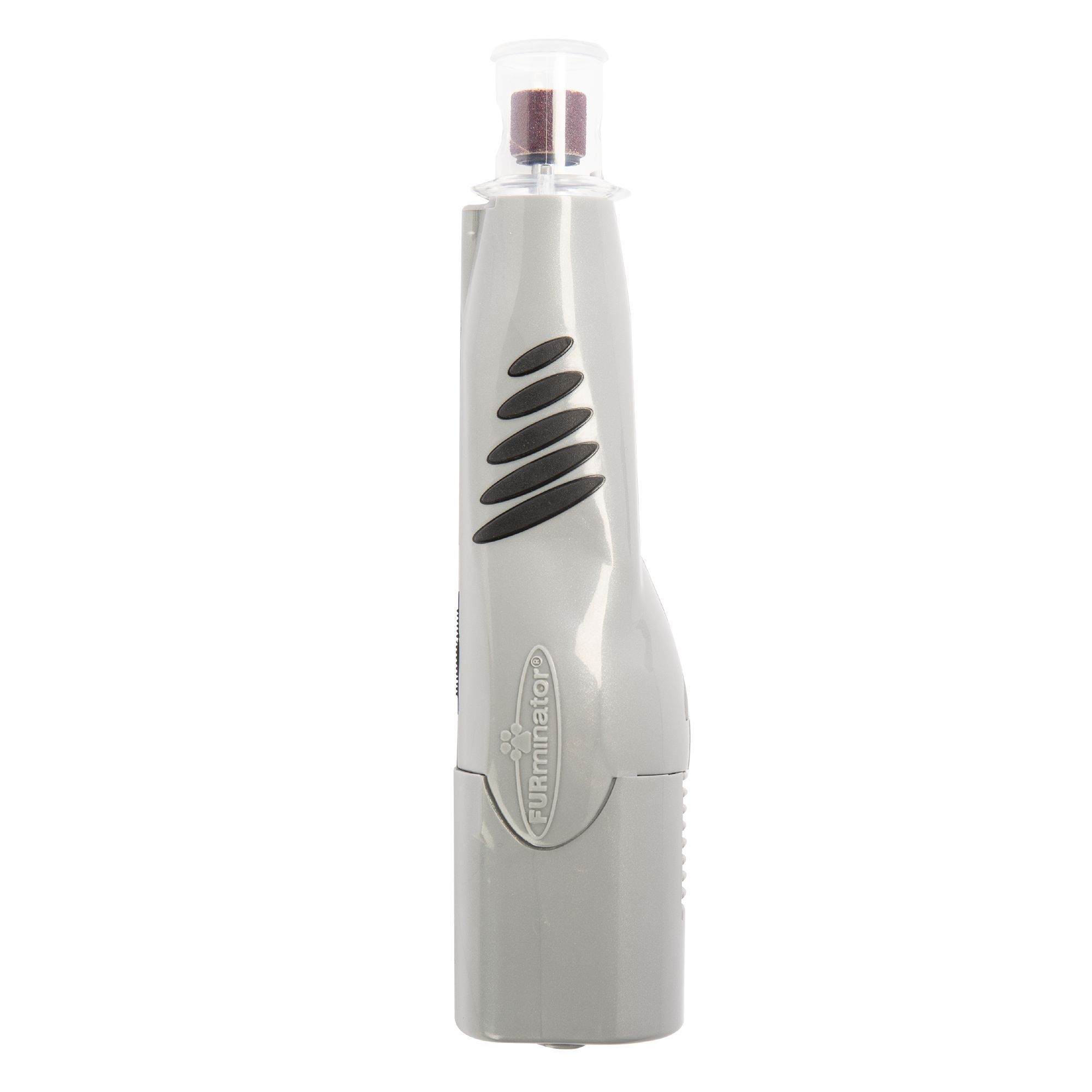 One of the top advantages a nail grinder has over a pair of clippers is that it can give your dog’s nails a soft-rounded edge that won’t snag on furniture or clothing.

That’s especially true of this grinder from FURminator. With two different speeds, it works quickly, which means you can get the job done in a jiffy (ideal for dogs who don’t like having their paws touched). The automatic LED light illuminates your pup’s nails while you work, so you’re less likely to accidentally nick your pup—especially crucial if your pup has dark nails. For added safety, it’s made of antimicrobial plastic that keeps germs and bacteria at bay. 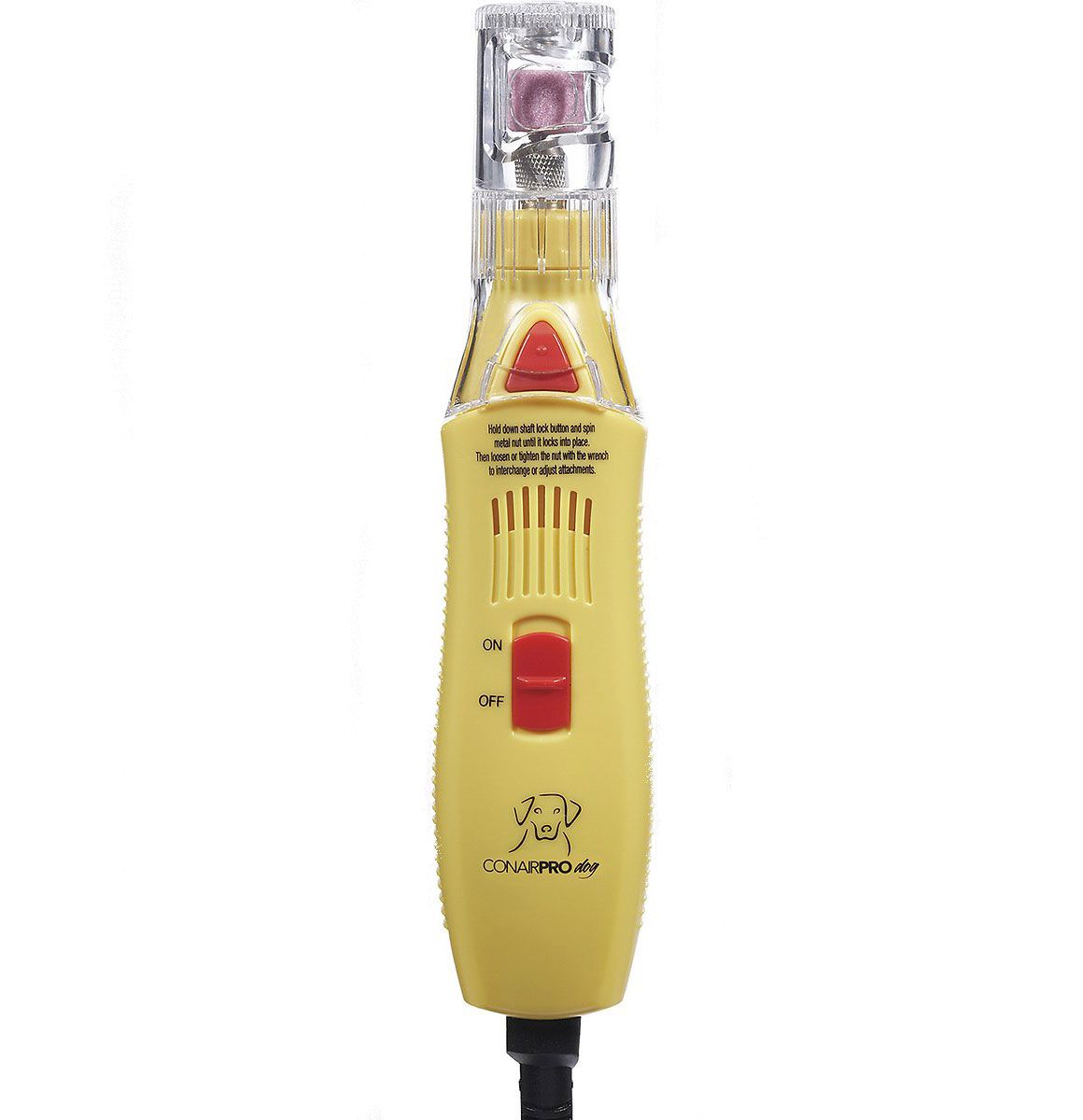 If your pup is skittish around loud noises, you’ll appreciate that this ConairPro Nail Grinder is super quiet, even when you put it into action. It comes with grinding bands and a finishing stone attachment to smooth the nails, plus a wrench to help you switch back and forth between the two.

The grinder has an adjustable safety guard cover to protect your fingers and your pup’s paws, and its small, compact size makes it easy for pet parents to use. 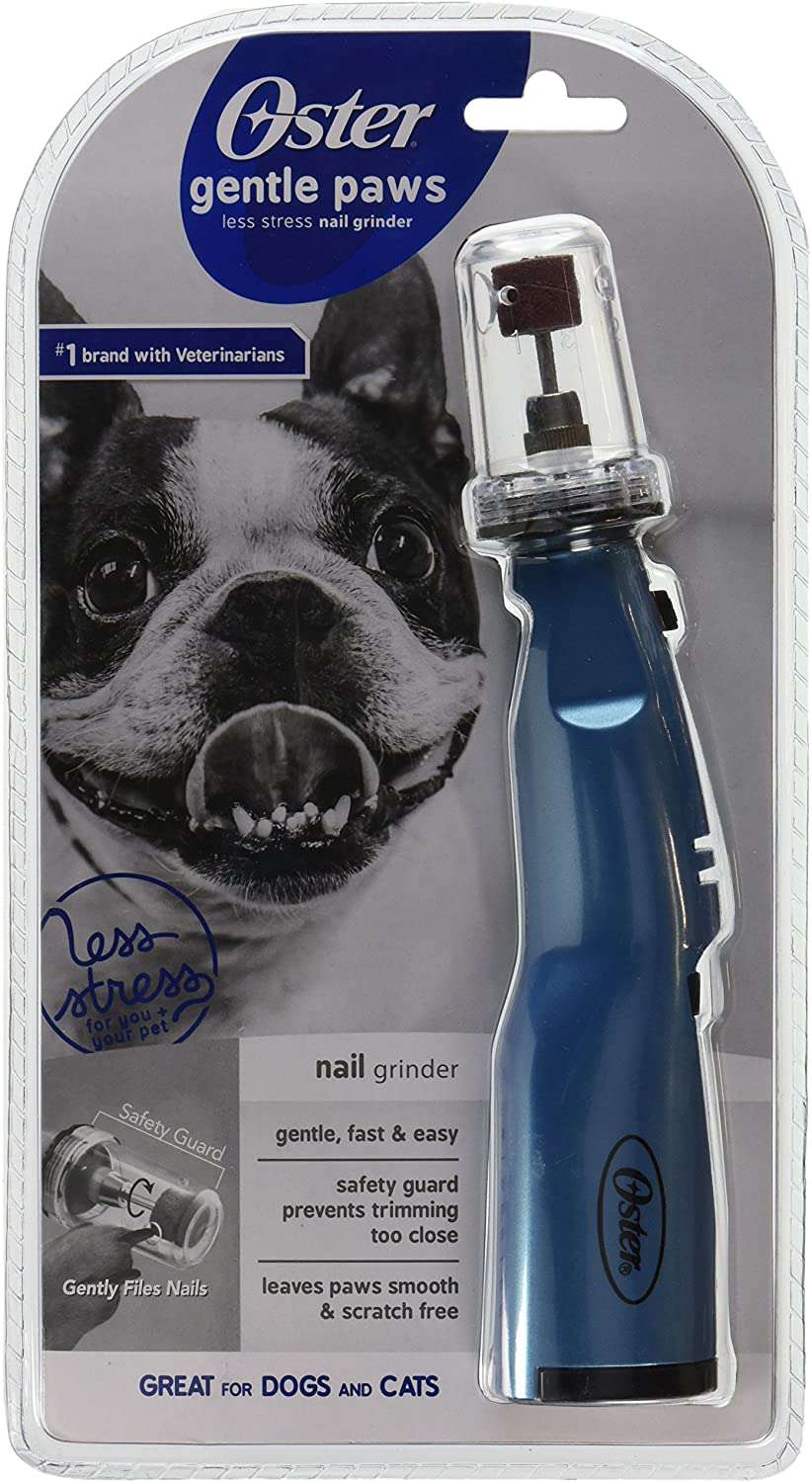 This cordless nail grinder runs on batteries, giving you one less thing to worry about. It also lets you trim your dog’s nails wherever they’re happiest, be it outdoors or in their crate. The two-speed motor that’s whisper-quiet, which also helps to keep your pooch calm.

The adjustable safety guard prevents accidents, while also catching any shavings and stopping nail dust from getting in their eyes. It works well on dogs of all sizes—plus cats, too. It takes four AA batteries. 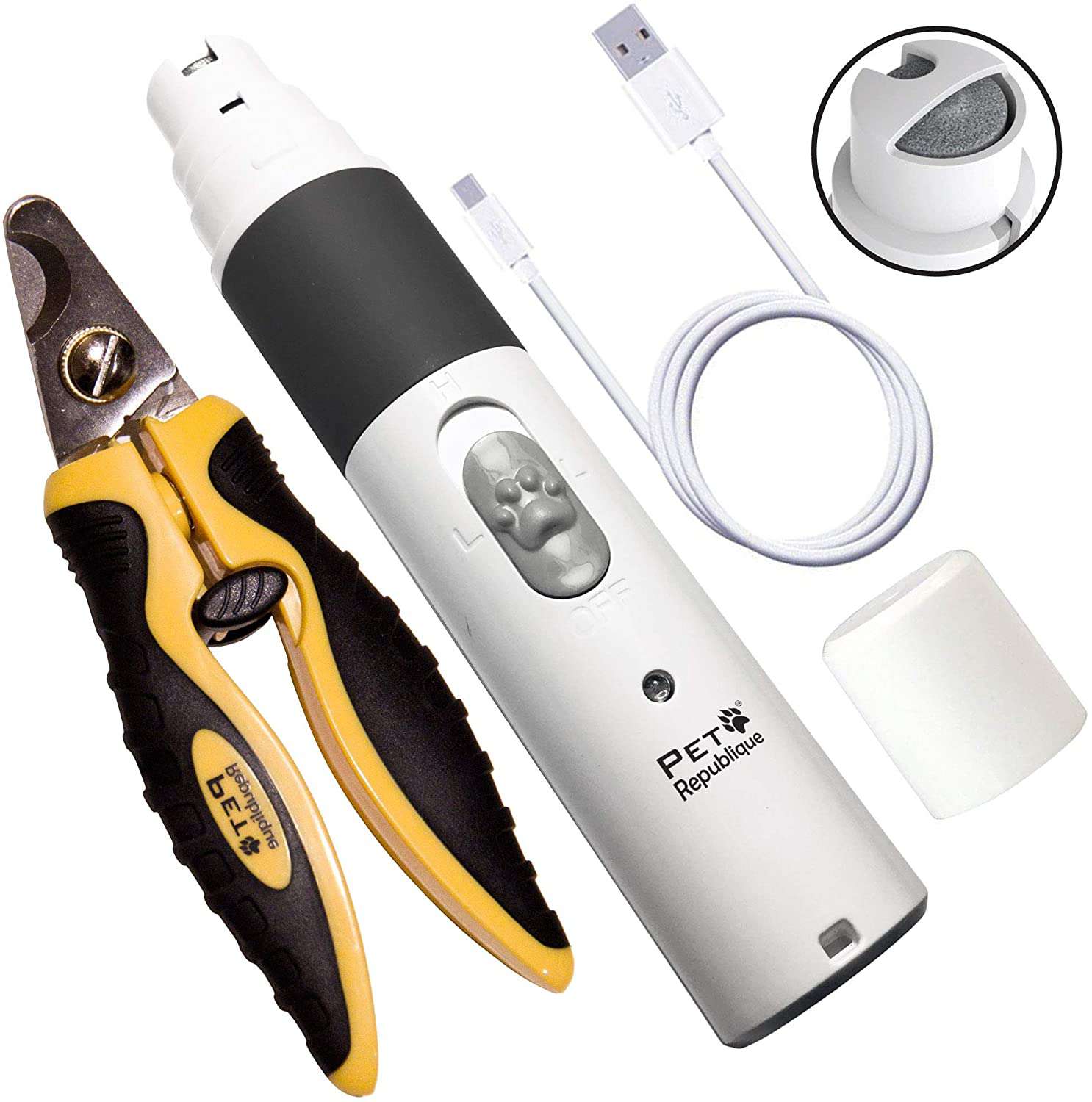 If you want the flexibility to use either a clipper or a grinder—or clip your pup’s nails followed by a filing session to smooth them out—this kit is for you. It comes with a pair of nail clippers and a cordless, rechargeable nail grinder for less than what you would pay for some nail grinders alone. The grinder has two speeds and three openings (small, medium, and large), so you can best customize the treatment to your pet. It also has a hair guard that prevents your pet’s fur from getting caught in the device. In addition to cats, you can use it on rabbits, ferrets, and other small- to medium-sized pets. 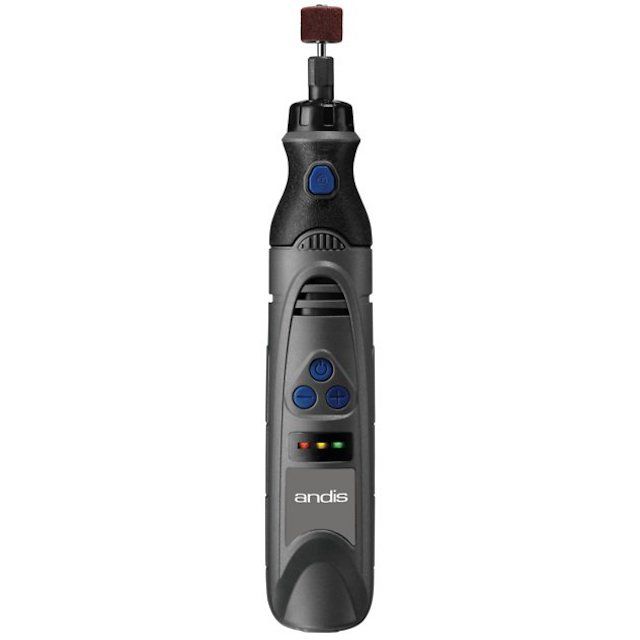 Not only does this Andis nail grinder feature sanding bands of two different sizes (because your pup’s toes and nails aren’t all the same length), but also it runs on six different speeds ranging from 7,000 to 18,000 RPMs. This helps ensure that it will work on all sorts of dogs (and cats!) by being slow and gentle—or quick and powerful—enough to get the job done. And it’s as easy to swap out the bands as it is to operate this ergonomically designed grinder, which has a rechargeable lithium-ion battery that can run for up to three hours on a single charge. For convenient transport, it all comes housed in a hard plastic carrying case.

The best overall nail grinder is the Casfuy Dog Nail Grinder, which has two speeds and three ports for ultimate customization. If you're on a budget (or just trying out at-home grooming for the first time), we recommend the Pet Republique Dog Claw Trimmer Kit, which includes everything you'll need to get the job done.

What to Look for in Nail Grinders

Pet nail grinders may be corded or cordless (battery operated). There are pros and cons to both. You need to remember to charge cordless nail grinders ahead of time. Nail grinders that plug in are always ready to go, but you must use them near an electrical outlet. If choosing a nail grinder with a cord, make sure it’s extra long for maneuverability.

Some pets don’t mind the buzzing from a nail grinder, but for pets that are worried about loud sounds, look for a pet nail grinder that is advertised to run quietly. Nail grinders with variable speed options give you the opportunity to choose a lower setting that’s quiet and has minimal vibration.