At first glance, the Boerboel might look like a mastiff—and this isn’t too far off, considering this breed also descended from the molloser-type dog that mastiffs also claim in their ancestry. However, the Boerboel hails from South Africa and displays an athleticism not commonly seen in other mastiff types.

Highly intelligent and eager to please, they have great learning potential. However, they’re a powerful dog with a dominant tendency that can easily overwhelm a novice dog owner. Versatility is a trademark of the Boerboel—intimidating enough to protect a homestead and sensitive enough to be a family dog.

Coat Color: Colors include brown, fawn, and red and may include white markings or a brindle pattern

Characteristics of the Boerboel

History of the Boerboel

The word ‘boer’ means farmer in Dutch, while ‘boel’ is the word for dog. Put them together, and you have your first clue as to this dog breed’s history: Farmer’s dog. The powerful boerboel was chiefly developed by Dutch farmers in South Africa to guard their homestead.

Unlike other livestock guardians, the boerboel had to particularly large and in charge to ward off African intruders that might include lions, leopards, and baboons. In addition to protecting the homestead, the Dutch settlers in the area used these dogs as big-game hunters. With their immense size and powerful bite force of up to 800 PSI (top in the canine world), these dogs were superlative hunting companions. However, don’t believe all the legends regarding the boerboel as a lion slayer; a leopard would be a more likely match for a dog of this size.

Unfortunately, there is little information available regarding the Boerboel’s early origins. Most of the details regarding this dog’s heritage are speculation based on the breed’s size and characteristics. As mentioned at the outset, they are considered a molloser-type dog, meaning they likely have roots tracing back to this ancient large-breed canine.

According to the AKC, Dutch, German, and French settlers in South Africa brought mastiff-type and bulldog-type dogs with them to guard their property and livestock. The interbreeding among these dogs, along with the inclusion of other European breed types, is believed to have resulted in the ‘farmer’s dog’ that we today known as the Boerboel. This dog breed sprang up from necessity more than a desire to create an innovative new breed, so the lack of documented history isn’t too surprising.

Despite existing for hundreds of years in South Africa, it was only in 2006 that the AKC added this breed to its Foundation Stock Service—a first step on the road to AKC registration. In 2015, the breed was granted official recognition by the AKC and added to the Working Group of dog breeds.

Proper training and care of a Boerboel starts the day you bring your dog home and requires consistency and effort. The Boerboel is a quick learner and is eager to please those whom he respects. The key is that you must maintain pack position and not allow a casual attitude towards training to erode your position as pack leader.

The Boerboel has a natural tendency towards dominance and will look to assert itself if it senses a void in leadership. Experienced owners often say that the real work of training a Boerboel isn’t teaching the basics of sit, stay, and come. Those skills and many more come easily to such a smart dog breed. The real work of training comes from the daily repetition of making your dog work for everything and strengthening your position as the dominant one.

The Boerboel is different than your average companion dog. Many casual dog owners can establish basic habits for their pet and get by without putting forth daily effort to train and reinforce pack position. Though every dog needs consistency in training, there is less at stake with a smaller dog versus a large breed dog bred for guarding and with a bite force of 800 PSI.

To ensure a healthy relationship with these dogs, it’s often emphasized that you need to make sure your Boerboel earns everything, including food, affection, a favorite toy, etc. This requires mental strength on the part of the trainer. If you’re not prepared to put in this type of consistent work, you might soon find that you have a dominant and powerful dog on your hands. This can prove to be a dangerous situation, and is, unfortunately, the reason why some Boerboels find themselves in shelters or rescues.

At the same time, training a Boerboel is well worth the effort. They’re often described as being excellent with children and wonderful watchdogs for home and property. One thing to keep in mind, however, is that the Boerboel often seems unaware of his size. This can be a liability around small children who might easily be toppled by this powerful dog. Supervision is always recommended.

The breed is most often described as aloof with strangers. It should be no surprise that you'll need to teach your dog early on how to distinguish intruders from guests. When it comes to animals, the Boerboel is generally agreeable to living with other dogs and even cats. However, unfamiliar animals may trigger this dog's guarding instincts.

Grooming a Boerboel is fairly simple. The breed’s short, coarse coat benefits from a regular brushing once or twice a week to remove loose hair and stimulate the skin. A slicker brush or a rubber grooming mitt works well. You’ll also need to perform the other grooming basics: clean your dog’s ears regularly, brush his teeth often, and trim his nails as needed. You should get your dog comfortable with these activities right away so that you can perform them without a struggle against a dog weighing 150 pounds or more.

The Boerboel is known for being a healthy dog breed. The diverse gene pool and the hearty stamina needed to carry out working duties on South African homesteads has kept the list of common health problems relatively short. However, the breed isn’t immune to health problems that sometimes affect large breed dogs. For this reason, the National Breed Club recommends that Boerboels be screened for elbow and hip dysplasia, as well as heart disease.

The Boerboel requires a well-balanced and properly proportioned diet just like any other dog breed. However, it’s large frame doesn’t mean you can be lax when it comes to treats or feeding extra snacks. In fact, the large size of this breed puts it at risk for joint problems and extra weight can amplify these issue. You should aim to keep your Boerboel at a healthy weight with lean body mass. 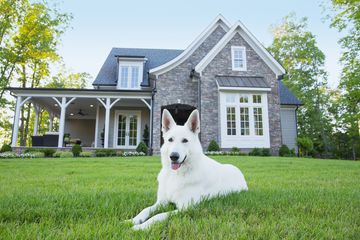 Where to Adopt or Buy a Boerboel

Boerboel breeders in the United States are relatively few and far between, but it’s not impossible to find a puppy if you have your heart set on finding one. Just know that you’ll likely have to exercise some patience and spend some time on a waiting list, in addition to possibly traveling out of state to pick up your new best friend.

On the other hand, if you’re interested in adopting a Boerboel, check with local or national rescue groups. These dogs are sometimes misunderstood and mishandled. If you have extensive experience with dogs of this nature, you might be a great candidate to rescue a Boerboel.

The Boerboel is a classic example of a working dog that lives to guard its people and property. Once you earn love from a Boerboel, you’ll appreciate their lasting loyalty. However, their size and smarts mean they’re not the right match for everyone, so be sure to take the time to learn more about this dog breed.

You might also consider learning more about these related dog breeds: