Border Terriers are loyal, adaptable, energetic, and intelligent. Like many terriers, though, they can also be vocal, strong-willed, and prone to chase and dig. They can be a challenge and won't be for every dog owner.

Characteristics of the Border Terrier

History of the Border Terrier

The Border Terrier (BT) got its name from the region that it originates from; the countryside along the Scottish and English border. They were originally referred to as the Coquetdale Terrier or Redesdale Terrier and share history with the Dandie Dinmont and Bedlington Terriers.

In the 19th century, farmers in this region wanted a dog that was athletic, brave, intelligent, and driven to help catch and deter the hill foxes in the area that would worry and steal sheep. They became popular in Northumberland in the north of England, where they also worked alongside foxhounds and accompanied local hunts.

Working-class groups predominantly ran the hunts in the north of England with the practical purpose of reducing the number of foxes, which otherwise could have decimated a farmer's livestock numbers. These were very different from the staged sporting hunts organized by the wealthy gentry farther South.

Border Terriers, with their coarse coats, could work in all weather conditions. Their coats also protected their skin if they had to chase a fox into its lair. They also have longer legs than your average terrier, meaning they were able to keep up with the larger foxhounds and hunters on horseback.

Recognized by the Kennel Club in the U.K. in 1920, they continue to be one of the countries most popular breeds.

It didn't take long for them to gain recognition from the American Kennel Club (AKC). Since this happened in 1930, the breed has remained popular in the U.S.. They aren't as popular here, however, as they are in their native Britain.

While Border Terriers are most commonly kept as companions nowadays, they still retain a lot of the hunting traits that they were bred for.

They're exceptionally loyal to their families and are usually up for any sort of adventure. They're adaptable little dogs and are equally at home in an apartment, providing they get enough exercise and enrichment, as they are living in a country farmhouse.

Their background working alongside foxhounds meant they were bred to get along with other dogs more than your average terrier, but they can still be rather bossy and feisty.

Their hunting background also means that they can have a high prey drive. With careful introductions, they may be able to live alongside the family cat, but they will likely have to be kept away from other small furries. Outside, unless you have worked on a rock-solid recall, they may need to stay on-leash in environments where they could have the opportunity to chase a squirrel or other wildlife.

Border Terriers can be prolific alert barkers, and you could end up with holes across your lawn from their digging. You may need to offer them a designated digging spot and work on asking for alternative behaviors to prevent nuisance yapping.

Your yard should also be well secured, as Border Terriers are known to be escape artists. They're smart, though, and will respond well to positive reinforcement training methods. Trying to force a strong-willed BT to do something they don't want to might not end well.

With treats, toy rewards, and plenty of fun and short sessions, you may be surprised by how quickly and enthusiastically your Border Terrier responds to training sessions. They often do well in things like agility and even canicross because of their enthusiasm, intelligence, and stamina.

Border Terriers, with their short, wiry coat, have a low maintenance grooming regime and they don't shed excessively.

A good brush out of their coat once a week will be enough to lift out any dead hairs and keep their coat and skin in a healthy condition. Most BT owners will have their dogs hand-stripped a few times a year to keep their coat from becoming scruffy.

Border Terriers are known for being a hardy and healthy breed, but they can still be prone to certain inheritable conditions. Making sure you find a good breeder that performs health checks on prospective parents can minimize the risk of genetic problems developing, but it's still worth being aware of some of the health conditions they can develop.

Border Terriers are prone to easily putting on weight. Obesity is a major problem for pet dogs worldwide, and it can lead to a whole host of other more serious health problems.

Making sure you feed your pet high-quality food and that you measure out the portions and adjust them according to your dog's activity levels is important.

Top Dog Breeds for Those Allergic to Dogs 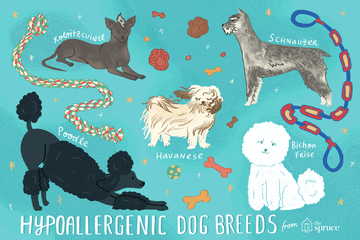 Where to Adopt or Buy a Border Terrier

You can also consider adopting a Border Terrier, or a similar small breed. Enquire with your local rescue shelters or reach out to a breed-specific rescue like North American Border Terrier Rescue.

If you're interested in dogs similar to the Border Terrier, you could also consider the following breeds:

There are lots of wonderful dog breeds out there. By doing your research, you'll find one that will be best suited to having a forever home with you.