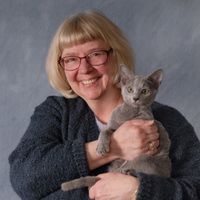 Sally Bahner
Sally Bahner is a well-regarded cat behavior expert and writer with over two decades of experience sharing her knowledge about feline health. She is the former editor of The Whole Cat Journal. Sally shares her expertise on cat nutrition, holistic care, and multiple cat behaviors.
Learn more about The Spruce Pets' Editorial Process
In This Article

Burmese cats are medium-sized felines with strong, muscular bodies, rounded heads, and expressive gold eyes. These affectionate and intelligent kitties may descend from an ancient breed in Myanmar (formerly Burma), but they were officially bred in the United States in the 1930s.

This breed is vulnerable to a genetic skeletal disorder, but it can be ruled out with a simple DNA test, so you should be able to buy or adopt one with confidence in its health. A Burmese will likely get along with everyone in a family, including friendly dogs, so it makes a charming addition to just about any household.

Coat Colors: Sable, champagne, platinum, blue, and variations of each

Lifespan: Up to 18 years

Origin: United States (but likely dates back to ancient Burma)

The Burmese cat is a character, full of energy and playful whims. Its kitten-like personality persists into adulthood, and it has also been described as being almost dog-like in its devotion to its human family.

When the Burmese isn't playing, it is probably following its owner around or cuddling for a nap. Females are more likely to be actively in charge of a household, while males supervise from the comfort of a lap. Both sexes have soft, sweet voices and enjoy "conversing" with people.

History of the Burmese

In Myanmar (formerly called Burma), legend has it that cats of this breed were viewed as sacred and celebrated in temples and monasteries. All sources agree that the “founding mother” of the Burmese breed was Wong Mau, a cat who was brought to America from Burma by a sailor in 1930 and given to Dr. Joseph G. Thompson of San Francisco.

Wong Mau was purportedly walnut brown with darker points, having a more compact body and shorter tail than a Siamese. Her unique appearance led Dr. Thompson to engage in a breeding program, pairing Wong Mau with Tai Mau, a seal point Siamese.

Some of the kittens more closely resembled the Siamese breed, while some looked more Burmese. Wong Mau was then bred to one of her sons, and the kittens were varying shades of brown, The darkest brown offspring became the foundation of the Burmese breed.

The Burmese and European Burmese are the two types of this breed recognized by the Cat Fanciers' Association. The Governing Council of the Cat Fancy, which sets standards for cats in the UK, recognized the Burmese in 1952. The International Cat Association, an organization at the forefront of keeping genetic registries for cats, accepted the breed in 1979.

Burmese cats' coats are short and fine with a glossy, silky shine. They require minimal grooming and do not shed much. Grooming your cat with a rubber brush once a week should be enough to rid the coat of dead hairs and keep it looking lustrous.

It is also important to keep your cat active. Burmese are playful and energetic and do best in active homes with families that are willing to play and interact with their pets. These cats are highly trainable and enjoy interactive challenges.

Burmese are generally healthy, but the breed carries an inherited disease called familial episodic hypokalemic polymyopathy, which causes skeletal muscle weakness. There is a simple DNA test to check a cat for this disorder, and responsible breeders should offer documentation showing their cats are free of the offending gene.

Cats affected with hypokalemic polymyopathy experience episodic issues that may affect the whole animal or may be localized to the neck or limb muscles, making it difficult to walk or hold their heads correctly.

In addition to hypokalemia, Burmese may rarely experience:

Again, reputable breeders test their cats for these diseases and offer a health guarantee as part of the sale of their kittens. It is always wise to buy from a breeder who provides a written health guarantee.

The colors of Burmese cats vary considerably, and different colors are approved by the major cat associations, making the Burmese standard one of the more complex among pure breeds.

Each association has specific standards for other Burmese characteristics, but they generally agree on the anatomy of the ideal breed representative. Overall, the cat's head should be rounded and have full eyes that are round and spaced well. There should also be a visible nose break and well-spaced ears. A medium-sized, muscular, and compact body is preferred with proportionate legs and rounded paws. The tail should be straight and medium in length.

To keep up with their active lifestyle, these cats need plenty of protein and nutrients. It is always best to discuss diet options with your vet to ensure all of your cat's needs are being met. High-quality dry food helps maintain good oral health and can be supplemented with wet food for added hydration.

To prevent your cat from becoming a picky eater, the National Alliance of Burmese Breeders suggests that it is important to switch brands of cat food now and then so your feline friend does not become accustomed to just one kind.

Where to Adopt or Buy a Burmese Cat

Search for a pure-breed Burmese cat by contacting veterinarians and breeders in your area. If you need to explore a larger area of possibility, check for breeders via the National Alliance of Burmese Breeders.

While it's rare that a purebred Burmese ends up in a shelter, it may happen, and Petfinder is a great site for helping locate a particular breed—or something close to it—across the nation.

Burmese are compatible with other pets and children. They are athletic, playful, and happiest in an active household. These cats yearn for attention from humans and can become upset if separated for long. Burmese develop strong attachments to their owners, and while they may need a couple of weeks to adjust to their new home, these deep bonds develop relatively quickly. To keep your Burmese happy, make sure it always has a companion, whether it's a human or another pet.