If you can't get enough tomatoes in your life, you're not alone. According to the United States Department of Agriculture, Americans individually consume more than 22 pounds of tomatoes every year—and, yes, the majority of that is in ketchup and tomato sauce. A less shocking fact: Where there's food, there's your dog, and you might be wondering if you can share the deliciousness with your four-legged friend.

Experts agree that while your dog can enjoy a bit of tomato every now and then, you might want to keep him or her out of your garden, and here's why.

The Dangers of Tomatoes for Your Dog

Tomatoes are part of the nightshade family of vegetables. These plants, including peppers, eggplant, and potatoes, contain potentially toxic elements but still bear edible parts. That means that while tomato fruits do contain many health benefits for your dog and can be given as an occasional treat, the rest of the plant can be toxic.

Tomatine is the toxic substance found in tomato plants and is related to solanine, the toxic substance found in other nightshades. When consumed in large quantities, it can be poisonous to our beloved pets. The good news: tomatine is concentrated in the green parts of the plant, especially the flowers and small stems. The tiny amount of tomatine that is present in ripe tomatoes is considered safe for dogs. Green tomatoes have more tomatine, but the difference is probably not meaningful.

Pet owners should keep in mind that the flowers, leaves and stems of the tomato plant contain potentially dangerous amounts tomatine for dogs. However, dogs are unlikely to eat enough of the plant to lead to problems.﻿﻿ Large grazing animals like cattle are at highest risk for tomato plant poisoning. With that said, it still makes sense to keep an eye on your dog whenever he or she has access to your garden.

Effects of Tomatine Consumption on Dogs

The most common symptom of tomatine poisoning is gastrointestinal distress, such as diarrhea or vomiting, but if dogs were to eat large amounts of the tomato plant they may also exhibit symptoms, such as depression, muscle weakness, hypersalivation, dilated pupils, or an abnormal heart rate—and you will need to seek immediate treatment from your pet’s veterinarian.﻿﻿

Just like in humans, tomatoes can also aggravate certain gastrointestinal issues, such as acid reflux, so it’s always a good idea to consult your veterinarian before offering your dog tomatoes. Tomatoes also happen to be a common allergen in humans, and while it's rare, your dog could have a similar reaction.

Help Your Itchy Pup—Understand the Most Common Dog Allergies 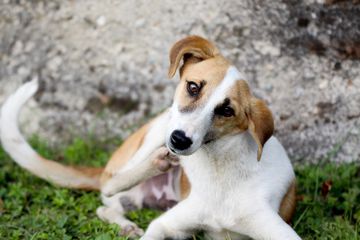 What About Ketchup, Tomato Sauce and Other Tomato-Based Products?

If your dog loves chomping on fresh tomatoes, keep in mind that he or she may also show interest in that pizza slice or spaghetti that you’re eating. Tomato sauces, ketchup, soups, or juices aren’t particularly healthy for dogs because of the added salt and sugar, as well as artificial flavors or other chemicals they might contain. Small amounts of tomato-based products like sauce likely won’t cause harm to your dog, however.

The Benefits of Feeding Your Dog Tomatoes

When offered to your pet in small quantities, tomatoes provide some health benefits. Tomatoes are chock full of nutrients, including the carotenoids lycopene and beta-carotene, which are powerful antioxidants that can help prevent cellular damage. The low-calorie fruit is also high in fiber, which aids digestion, and tomatoes are rich in vitamin A and C to help boost your pet’s vision and promote healthier skin.

How to Serve Your Dog Tomatoes

When offering your dog tomatoes, you’ll want to look for mature, ripe, red tomatoes (cherry tomatoes and other varieties are also fine) that have all of the stems, leaves, and vines completely removed. While many people prefer their tomatoes salted, these types of additives can be harmful to your dog, so small pieces of a plain, thoroughly washed tomato are always the safest way to serve them to your pet.

Start by offering only a bite or two and see how your dog reacts. If he or she enjoys the tomato and experiences no adverse effects, feel free to continue offering small amounts as a treat.