Height: 22 to 26 inches tall at the shoulder

Colors: Most colors are acceptable, such as bicolor, black and tan, black and cream, black and red, black and silver, solid black, gray, sable

Characteristics of the Czech Shepherd

History of the Czech Shepherd

Like the German Shepherd dog, the Czech Shepherd dog’s medium-length double coat sheds abundantly. Brush once a week (more often if you want to cut down in hair in the house). Shedding aside, Czech Shepherds are wash and wear, needing only occasional baths, biweekly nail trims, and ear cleaning every few weeks.

Czech Shepherds require a huge amount of training and exercise. Most won’t be content to hang around with nothing to do—this is a breed that needs a job. Like the German Shepherd, Czech Shepherds are extremely smart and highly trainable. Consider training for a competitive dog sport like agility, disc dog events, or schutzhund, which tests working skills like tracking (scenting), obedience, and protection. Provide ample daily exercise and mental stimulation, including off-leash running, hiking, retrieving, and obedience training.

Provide Czech Shepherd puppies with lots of socialization early so they grow up to be accepting of friendly strangers. Czech Shepherds like to use their voices, but they are not known to bark incessantly for no good reason—if yours sounds the alarm, you’ll want to check things out.

Czech Shepherds are prone to the same genetic issues have been identified in the German Shepherd, including hip dysplasia, elbow dysplasia, and degenerative myelopathy (a disease of the spinal cord). Bloat (gastric dilatation volvulus), a condition where the stomach fills with air and twists on itself, is also a concern. Breeders of working line dogs generally pride themselves in making the health of their breeding dogs a priority, testing their adult dogs prior to including them in their breeding programs.

Highly active dogs like Czech Shepherds should eat an energy-dense, high-quality food. If you’re not sure what to feed your Czech Shepherd, or how much to feed, talk to a breeder or ask your veterinarian for advice. Because they tend to get a lot of exercise, obesity isn’t usually a huge concern in the breed, but sedentary older Czech Shepherds might need a lower-calorie diet to prevent weight gain, which can exacerbate joint disorders like arthritis and hip and elbow dysplasia, and can lead to other health issues like diabetes. 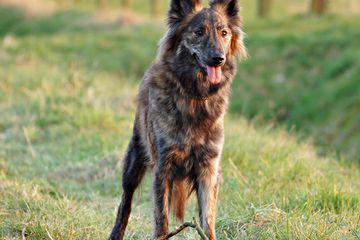 The Czech Shepherd dog may not be the best choice for the average pet owner, but experienced dog owners looking for a high-octane performance dog or working dog can be a good match for the Czech Shepherd. It’s best to look for a breeder who lives in your own country rather than try to import a puppy. If you are interested in adoption, some Czech Shepherds that prove too intense for the average owner may also end up in animal shelters and rescue groups.