Of all the dog breeds, the labrador might just epitomize the title of "man's best friend". And the English labrador is no exception.

This loyal and affectionate breed is easy-going, friendly, and great with kids and other pets, while at the same time highly intelligent and motivated to please their owners. They remain one of the most popular sporting dogs and are known to be able to remain calm even in the most stressful situations.

The English labrador's energy comes out in a way that makes these dogs perfect for training; they love to do tricks and romp around in the backyard or go on long walks. But best of all, these devoted and lovable dogs are also perfectly content with cuddling on the couch.

Coat and Color: Double coat in yellow, black, or brown

Characteristics of the English Labrador

History of the English Labrador

Labradors date back to the 1830s, where they were first being established in Newfoundland, Canada, as well as in England. Their ancestors, the St. John’s dog, worked with fisherman in icy waters and other harsh conditions, and since these hearty working dogs captured the attention of visiting English nobles in the early 1800s, a few of the dogs returned to England where breeders refined and standardized the labrador breed.

Labradors were originally bred to be water dogs, hunting dogs, and gun dogs, and would often be called upon to accompany hunters to retrieve animals. Their hard-working nature coupled with their loving and affectionate personalities quickly made their popularity rise, and they became a beloved family pet. Over the next few decades, two different strains of the dog emerged thanks to specialized breeding; it's believed that today's American labradors were bred from working lines, while English labradors are bred from show bloodlines.

Though both the English and the American labradors are technically considered to be members of the Labrador retriever breed, they were established as different types due to a few distinct differences. For one, English labradors tend to have a stockier frame and thick coat, while American labradors are generally more slender and have a finer coat. The English labrador's head also tends to be wider with a fuller face and shorter muzzle.

Generally speaking, American labradors have become a favorite of field trials due to their incredible energy; while English labradors are also high-energy dogs, they are also considered to be more laid back and excel in dog shows. The American labrador tends to be more of an elite athlete, with the matching energy and stamina, while the English labrador is more laid back and isn't quite as excitable.

Today, the English labrador continues to be used as a family pet and companion dog, but they are also well-known service and working dogs. Their friendly personality and strong work ethic mean that they make excellent guide and therapy dogs.

Sturdy and strong, the English labrador is a high-energy breed—which means they are best suited for families who will be able to provide them with daily exercise and lots of room to run and play. This will not only ensure their physical health, but also help maintain their mental well-being and easy-going, calm personality. They will do perfectly well with first-time dog owners because they do not have a demanding temperament.

The English labrador has a thick double coat, which means it will require regular brushing. Aim for at least weekly brushing (twice a week is better) in order to help maintain their coat's health and shine and ensure your pet's comfort.

Like any dog, it's important to properly train and socialize your English labrador. They are easy to train thanks to their intelligence and desire to please, but because of their strength and energy it's always important to take extra steps to socialize them properly. This way, you can better avoid unwanted behaviors such as jumping on people and dragging their owners on the leash.

The English Labrador has been associated with elbow and hip dysplasia as well as certain heart and eye conditions.

Exercise induced collapse is a genetic condition that has been known to affect labradors; it can lead to muscle weakness, incoordination, and collapse following periods of exercise.

Similarly, they (like many other larger breeds) are prone to the life-threatening condition known as bloat. Officially called gastric dilatation volvulus (GVD), bloat occurs when the stomach fills with gas and twists, and can cut off the dog's blood flow and even lead to death.

The English labrador is a breed that can easily become overweight when not provided with the appropriate nutrition and ample opportunities to exercise, as they tend to consume more than they should. 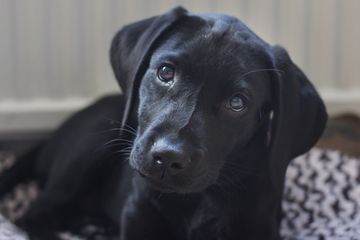 Where to Adopt or Buy an English Labrador

Thanks to the popularity of the labrador retriever, there are any array of breeders and breed-specific rescues for retrievers, including the English labrador.

When determining if the English labrador is the right dog for your family, be sure to research all aspects of the breed and consult other English labrador dog owners as well as breeders and rescue groups to learn more. In the meantime, you can also check out these other dog breeds:

There's a wide array of dog breeds out there. With a little research, you can find the right match for your family.