One of the best parts of bringing home a new pet is choosing a special name. Many people turn to their favorite books or movies for inspiration. Harry Potter (both the books and films) have such a devoted following that there’s even a name for it: Pottermania. If you’re a fan, then you know the wizarding world is jam packed with unique and creative names that are perfect for pets of all species.

Your new pet has enchanted you with a love spell, and now it’s time to return the favor by bestowing it with the perfect name. Potterheads, pull up some parchment and a quill—you’ll want to take notes.

When thinking about Harry Potter pet names, first consider your new pet’s species. Whether you have a dog, cat, rabbit, guinea pig, bird, reptile, horse, hamster, rat, mouse, gerbil, chinchilla or any other pet, the Harry Potter world is guaranteed to have a more than a few outstanding choices for you.

Also take into account your pet’s size (tiny, huge or in between?), color, sex, and individual character (sociable or shy? Silly or serious?). Within vast and varied world of witchcraft and wizardry, you’ll find names to fit any pet’s personality.

Read on to find a collection of some of our favorite Harry Potter pet names, broken down into categories, including Harry Potter names for dogs, cats, male pets and female pets.

To start us off right, let’s looks at some of our favorite Harry Potter pet names across all categories:

Ideas for Naming Your Pair of Pets 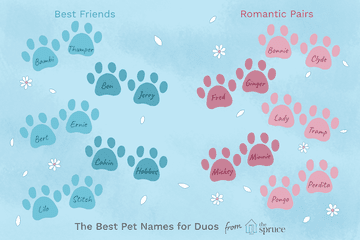 It makes sense to break down Harry Potter pet names by species and sex, but there are no limits to the name you choose.

Hoping for something obscure? Remember, you’re not limited to the original seven books or eight films. Harry Potter author J.K. Rowling has penned many other books about the Harry Potter world, each filled with incredible detail—and more potential names. And don’t forget about the website Pottermore, where Rawling provides even more background about Harry Potter characters, history, spells, places, and more.

The Harry Potter universe has some prominent dogs or dog-like creature. The following names are perfect for a Harry Potter pup:

Cats also feature prominently in the Harry Potter books and movies. These names pay homage to Harry Potter cats, both good and evil:

Have a male pet? Try one of these masculine names on for size:

The Harry Potter series is filled with strong females—both good and evil—including: