The modern American Pit Bull Terrier can trace its roots back to England and the early 19th century. Crosses between “bully” type dogs and terriers eventually produced the modern APBT. Although not recognized as a breed and much smaller than the modern APBT, the early “bulldogs” were used as working dogs, controlling unruly bulls for butchers as well as farmers.

These “bulldogs” resembled the modern APBT but were considerably smaller, weighing in at 15 to 30 pounds. The courage and tenacity that made these dogs good at corralling dangerous bulls made them great at the blood sport of bull baiting. The year 1835 saw the end of deadly bull baiting and the emergence of an even more sinister blood sport: dog fighting.

In 1898, Chauncy Bennet formed the UKC, a breed registry aimed solely at the registration and acceptance of pit bulls. The AKC had wanted nothing to do with pit bulls, so Bennet sought to create an organization that would represent the breed as performance dogs. Mr. Bennet added “American” and initially dropped “pit” from the APBT’s name, but public outcry led to “pit” being added back to the name—thus, the American Pit Bull Terrier.

The AKC decided to register pit bulls but under a different name—the Staffordshire terrier, which was later changed to the American Staffordshire terrier (AST) in 1972. Up until 1936, pit bulls and ASTs were physically identical. After 1936, ASTs were bred solely for conformation, and their breed requirements became much more stringent. APBTs were being bred for both performance (fighting), as well as conformation shows and the breed’s standard became much more lenient. The ASTs, phenotypically, became “flashier” with blockier heads, larger chests, and a thicker jaw, while the APBTs varied phenotypically from lanky to stocky. Although the appearance varied in the APBT, relative weight, size, and proportion remained constant and dogs over 60 pounds were rarely seen. Both ASTs and APBTs were bred to be exceptionally sturdy and extremely human-friendly, not to mention athletic, courageous, and tenacious.

These dogs are subject to bans and restrictions in many countries, including the United Kingdom, the Canadian province of Ontario, and many local jurisdictions in the United States.

The short, smooth coat of the American Pit Bull Terrier requires little more than routine grooming. Although some dogs will wear down their nails naturally from walking, most still need regular nail trims to keep their feet healthy. Give the dog baths as needed to keep the skin and coat clean and healthy.

The American Pit Bull Terrier is an athletic dog breed with plenty of energy, so routine exercise is very important. They will especially benefit from dog sports that challenge them mentally and physically. Regardless of the type of exercise, be sure it is provided about twice daily or more. Without a proper outlet for all that energy, your dog may become destructive, hyperactive, or develop other behavior problems. They like to chew and have powerful jaws, so have durable chew toys available.

As with any dog breed, proper training is a must for the American Pit Bull Terrier. This is a fairly smart dog breed that can be stubborn, following its own will if permitted. Obedience training is essential in order to manage your dog. Training will boost your dog's confidence and provide structure. Because of the fact that pit bull-type dogs are commonly misunderstood and even wrongly portrayed, some people will fear your dog. Dog trainers and animal professionals often recommend that American Pit Bull Terrier complete Canine Good Citizen certification as an added step in responsible dog ownership.

Overall, the American Pit Bull Terrier is deeply affectionate, intensely friendly, and joyfully energetic. The breed can become a loving companion for many types of active households. However, be aware that the breed has a strong prey drive and a history of dog fighting, so the dog should be supervised and carefully introduced when meeting other animals and small children. This includes outings to the dog park. Always walk your dog on a leash and do not allow it to roam free. These dogs may not start a fight, but they do not back down when challenged.

However, with proper training and socialization, the breed can get along very well with children and even other pets. The American Pit Bull Terrier is known to forge a strong bond with its family. This breed can become a loyal family pet and friend for life.

In owning an American Pit Bull Terrier, you must continuously monitor the local laws in your jurisdiction and any through which you travel. Any laws applying to pit bulls apply to this breed.

Just like traits such as personality and appearance can be associated with the dog breed, certain health problems are inherited. Responsible breeders take care to maintain the highest breed standards as established by kennel clubs like the AKC. Dogs bred by these standards are less likely to inherit health conditions. However, some hereditary health problems can occur in the breed.

Conditions to be aware of include:

In general, American Pit Bull Terrier need 1.5 to 2.5 cups of high-quality dry food per day, which you should divide into two meals. Always make sure that they have clean, fresh water for drinking. Be aware that your dog's diet needs will change over time as they age. Work with your veterinarian to figure out an individualized diet plan for your dog. 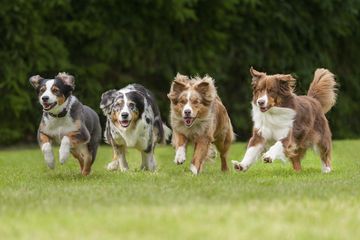 Where to Adopt or Buy an American Pit Bull Terrier

American Pit Bull Terrier and pit bull mixes are commonly available for adoptions, accounting for as much as 20 percent of dogs at shelters. Check with animal shelters, animal control, and local rescue groups to find a pit bull in need of a home.

Before you decide whether the American Pit Bull Terrier is right for you, be sure to do plenty of research. Talk to other owners, reputable breeders, and rescue groups to learn more.

If you’re interested in similar breeds, look to these to compare pros and cons.

There’s a whole world of potential dog breeds out there—with a little research, you can find the right one to bring home.