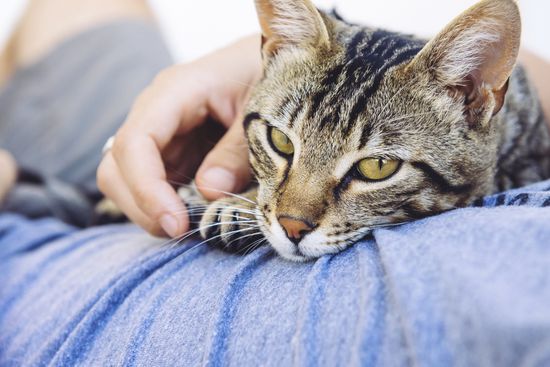 How to Discipline Your Cat

Adrienne Kruzer
Adrienne Kruzer is a veterinary technician with more than 15 years of experience providing healthcare to domestic and exotic animals. She is trained as a Fear Free Certified Professional to prevent and alleviate fear, anxiety, and stress in pets.
Learn more about The Spruce Pets' Editorial Process
Reviewed by Nancy Turner

Cats have an unfair reputation as spiteful, untrainable, or uncaring, but none of these are true. It is possible to discipline a cat for harmful or destructive behavior. Cats are frequently known to jump on the counters, chew on wires, and scratch household items that are not designed to be scratched. Some of these behaviors are natural reactions to a cat’s environment, while others are simply bad habits. It's often possible to discipline a cat out of these types of annoying behaviors by clapping your hands, raising your voice, or using an air spray. It's not a good idea, however, to discipline your cat by hitting it, frightening it, grabbing it by the scruff of the neck, or other negative methods.

Allowing a cat to behave badly without consequences reinforces the idea that the behavior is acceptable. Fortunately, it's possible to change a cat's behavior by rewarding for good behavior and disciplining for bad behavior. However, because you don't want to damage your relationship to the cat or hurt it, it's important to know the right way to discipline a cat.

Cats are smarter than many people think and they have a great memory. Experts state that cats have both long-term and short-term memory so they are trainable. At the same time, it also means they know what they can get away with repeatedly. Don't mistake this for spite; your feline is merely following its ingrained behavioral traits.

Pets, like people, react well to positive reinforcement, so cats will remember when they get something they enjoy. Most cats like attention, food, toys, or all three. Choose a motivator that you can use to entice your cat to do what you want it to do and to provide it with a form of positive reinforcement. If possible, reward your cat with this special item only when training for this particular behavior. By reserving the desirable item for training, it will add to the value of the reward and make it that much more enticing to your cat.

If you are struggling to find an item that your cat is motivated by, consider things like tuna, canned spray cheese, shrimp, and catnip toys. These may be items that your cat has never experienced before, so they may help in getting your cat’s attention. Many cats love crunchy treats, especially those with chicken or fish flavors. And of course, a session of cuddling and petting may inspire your cat to behave if the misbehaviors were caused by a desire for more attention.

Disciplining your cat personally is not a good idea. It does nothing but teach your cat to be afraid of you and does not deter the bad behavior when you are not present. However, there are some ways to prevent behavior even if you aren't around.

It's not recommended to use spray bottles or noisy cans to punish or deter your cat. Your cat will only start to be wary of you when you are around and will continue the bad behavior when you aren't around. The only effective thing you have taught your cat is to be scared of you. This is obviously not want you want!

To have a spray or other deterrent be effective, it has to be deployed every single time the cat performs the behavior. This is why double sided tape or the motion-sensor air sprays are more effective. First, your cat associates the negative with the counter or object, not you, and, second, it is present all the time, even if you are not there. The other thing to avoid doing is rewarding the bad behavior with attention. Ignoring your cat or redirecting them to a toy is better than picking them up, talking to them, or petting them when they are performing and undesirable behavior.

Provide alternatives so that your cat has an outlet for the behavior it is trying to express. For example, if your cat "counter surfs" it may want to be up high. Provide a perch or a window sill bed that is about the same height as the counter, then reward your cat it when it uses the perch. Or, if your cat jumps to the faucet every time it turns on, it may just want some running water to drink from, so consider getting a fountain.

Certain pheromones can be sprayed on an object or diffused into the area that you do not want your cat to scratch. These pheromones (like Feliway) signal to your cat that they have already "marked" the area and do not need to mark it again. Cats often mark territory by scratching. Obviously, providing a scratching post for them and placing treats or other rewards around the post will help deflect unwanted scratching as well.

The most important thing to remember is to never physically punish your cat. This includes spanking, hitting, kicking, or hurting your cat intentionally. Attempting to teach a cat a lesson through physical means does not work and can actually lead to more disruptive, even aggressive, behavior.

Do not scruff your cat. This is no longer recommended as a method of restraint or transport for adult cats. Scruffing is painful and when you cause a misbehaving cat pain, it will only further exacerbate an issue. It is also thought that what appeared to be relaxation for some cats who are scruffed is actually fear paralysis.

An alternative to grabbing a cat by the scruff is putting a blanket over it and scooping the cat up inside it. This will keep you and the cat safe and allow you to transport the cat without stressing it out further.

What Is Scruffing in Cats?

Believe it or not, techniques used to train dogs, such as positive reinforcement clicker training, also work well in cats! Rewarding positive behavior with treats, pets, or play gives your cat the good vibes it needs to continue to exhibit this behavior and it strengthens the positive bond you have with your cat. Whenever possible, give treats, praise, and attention to your cat if it is behaving nicely. If you notice it lying next to something it used to chew, reward it. If you notice it scratching the scratching pole instead of your sofa, reward it. Your cat will quickly learn the difference between good and bad behavior.

You can also use this type of positive reinforcement to teach your cat tricks, such as shaking hands, rolling over, or sitting up. Tricks aren't only for dogs! Many felines enjoy the extra attention and rewards of learning and performing simple tricks with their favorite humans.

Sometimes, a medical issue might cause your cat to act out or develop distressing behaviors. One common such issue is a cat with a urinary tract infection, diabetes, or hyperthyroidism that has urinary urgency due to the health problem, is unable to reach its litter box in time, and ends up urinating outside the box. While many owners might simply assume this is a behavioral issue that deserves punishment, it's not going to get better without appropriate treatment.

If your cat suddenly develops behaviors that are troubling, including aggression or shyness in a cat that was formerly friendly, urinating inappropriately around the house, fighting with other household pets that the cat got along with previously, or simply acting in a way that seems "off," it's a good idea to schedule an appointment with your veterinarian. It may be that rather than being spiteful or difficult, your cat is suffering from an undiagnosed medical condition or ailment.

Watch Now: What Is Your Cat Saying to You?