A cat perch that turns any window into a birdwatching station 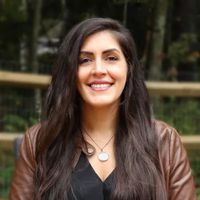 Lindsay Boyers
Lindsay Boyers is a writer and nutritionist with more than 10 years of experience writing about food, nutrition, and wellness. She has 11 published books and is a passionate pet owner and wellness advocate.
Learn more about The Spruce Pets' Editorial Process

Because you can’t open the windows while it’s in place, the Kitty Cot Original World's Best Cat Perch isn’t a perfect cat perch solution, but it’s still a good place for your cats to take their midday naps.

View On Amazon View On Chewy
4.2

View On Amazon View On Chewy
In This Article

We purchased the Kitty Cot Original World's Best Cat Perch so our reviewer could put it to the test in her home. Keep reading for our full product review.

If you have a cat (or three, like me), you already know that they rule the roost. And that means that when they want a window seat, you better have one available, or you’re going to be met with angry meows or, worse, scratched window sills. One option is to install a velcro cat perch, but while these are plenty sturdy, they end up ripping the paint off your walls and windows (been there). Another option is to strategically position a cat tower in front of the window, but then you lose part of your view and a decent amount of prime square footage. So, what’s the answer? Could it be the Kitty Cot Original World's Best Cat Perch? I had to know.

At first glance, the Kitty Cot seems like an ingenious solution. It’s a rectangular “cot” made of a rugged, tough nylon mesh wrapped around PVC plastic pipes and fittings. Instead of velcro, the cot attaches to the window with steel support cables that are clipped onto large suction cups. It all sounded too good to be true, so I was excited to see if it could earn the approval of three discerning cats (and handle the weight of the two large Maine Coon mixes).

While I never saw it fall off the window when they jumped onto it—or while they were lying in it—I did find it randomly on the floor several times.

The directions recommend cleaning the windows before installing the Kitty Cot as the suction cups stick better to clean windows. I gave them a quick wipe down and then got to “installing,” which probably isn’t the best word since the suction cups pop onto the windows in about three seconds, and then you’re done—no tools or additional equipment required. It did take a little readjusting to get the Kitty Cot level, but that was done in a couple of minutes too.

It was sturdier than I anticipated, and the added weight of the cat actually seemed to increase the hold the suction cups had on the windows.

Now came the hard part: getting feline approval. I called my cats over, and while they were interested in the new contraption attached to the window, they were hesitant to jump on it. To get them used to the idea, I picked one—a 15-pound Maine coon mix—up and placed him on the perch. He sniffed around a little bit and then eventually laid down and seemed to enjoy the new view.

It was sturdier than I anticipated, and the added weight of the cat actually seemed to increase the hold the suction cups had on the windows. But when it came time to jump off the perch, he seemed a little unsure and unsteady. He eventually made the move but only after some out-of-character hesitation.

I called my cats over, and while they were interested in the new contraption attached to the window, they were hesitant to jump on it.

Even after a few months of having it in the window, and moving it to different spots to see if a different view would entice them more, the cats never really seemed confident in it. They would jump in it occasionally, but there was always a moment of pause like they could sense that it might not be the most secure landing place. It never became their go-to lounging spot.

While I never saw it fall off the window when they jumped onto it—or while they were lying in it—I did find it randomly on the floor several times. According to the manufacturer, the suction cups need to be pushed back down periodically because they can lose their grip due to temperature and/or humidity variations, so I assumed that was the problem (the weather in Massachusetts is totally unpredictable). I didn’t like the idea that the perch could potentially fall off the window when my cats were snoozing in it though, even if they do always land on their feet.

Another downside, especially as the weather started to warm up, is that because the cot suctions to the glass, it moves with the window when you open it. My indoor-only cats love to sit in front of an open window and chirp at the birds outside, but that wasn’t possible with the Kitty Cot. You also can’t close the blinds, unless you opt for the Kitty Cot Deluxe. With the velcro-style perches that attach to the windowsill, you can have the best of both worlds.

The “Tiger Mesh,” as the black nylon fabric is called, held up well, and after three months, it still looked brand new. It didn’t have any rips or tears, a seemingly impossible feat with cats who like to sharpen their claws on everything.

The 11 Best Cat Scratching Posts of 2023, Tested and Reviewed

Does the kitty cot come in different sizes?

There’s also a Kitty Cot Deluxe option that’s 25.5 inches wide but only 12 inches deep. The Kitty Cot Deluxe is designed with a slimmer profile so that you don’t have to remove it from the window if you need to close the blinds.

How much weight does the Kitty Cot hold?

The maximum weight limit of the Kitty Cot is 25 pounds, no matter which size you get.

Is it easy to move the Kitty Cot from window to window?

Yes. The suction cups pop right on and off the window, so you can take the Kitty Cot down and put it up in a different window in a matter of seconds.

Does the Kitty Cot lose suction over time?

The suction cups don’t lose their ability to stick to the windows, but they may need some care over time. You may have to occasionally wash them in warm, soapy water and then dry them with a lint-free cloth to enhance suction. Rubbing a little bit of cooking oil or a small amount of petroleum jelly on the rim of the suction cup can also help it stick.

If you’re not sold on the Kitty Cot, the TRM Deluxe Pet Cat Window Seat Perch is another option. It attaches to the windowsill via a velcro strip, so you do run the risk of it pulling off the paint, but you can open the window and close the blinds while it’s installed. It also has a lower weight limit—around 15 to 18 pounds—so if you have larger cats, you may need to screw it in place to ensure that it doesn’t fall. It retails around $50, just like the Kitty Cot.

It’s worth a shot.

Because cats are notoriously picky and have very different personalities, it’s best to let them make decisions about what they do and don’t like. While my cats weren’t super interested in the Kitty Cot Original World's Best Cat Perch, it’s an excellent concept that works well with a little extra attention (like pressing down the suction cups regularly).