The Lakeland Terrier is often referred to as a big dog in a small dogs body. This old breed was originally developed to protect sheep flocks from foxes on the Fells in the Lake District region of the United Kingdom. Now they are known for being companions that are fun, feisty and full of confidence.

Coat: Thick and wiry top coat and a soft undercoat

Coat Color: Come in a variety of colors from black through to wheaten

Characteristics of the Lakeland Terrier

History of the Lakeland Terrier

The Lakeland Terrier is an old working breed that hails from the Lake District area in Northern England. They are considered one of the oldest of the terrier breeds with a history that can be traced back to the 18th century. They are thought to be related to a number of different terrier breeds including the Dandie Dinmont, the Wire Fox Terrier and the Bedlington Terrier.

Lakelands were originally developed to help prevent foxes from taking lambs from the sheep that grazed on the Fells. These moor covered hills could be harsh landscapes, often experiencing wild weather conditions and the dogs that worked these lands needed to be hardy, determined and brave. The Lakeland Terrier was a perfect match.

Their weather-resistant coat helped them cope with the changeable weather. Their size meant that they could follow a fox into its den, and their bravery and tenacity meant they worked well for the farmers. They were sometimes also referred to as Fell, Westmoreland or Cumberland Terriers, all relating to the region they come from.

As their popularity grew, they were also often used by local fox hunt groups, for badger hunting and even down the mines. In 1921 the Lakeland Terrier Association was created in England, and they were first registered in the United States by the AKC in 1934. They have gone on to win many of the major Best In Show competitions over the years.

Despite this, and their fun-loving personalities, they are now considered a vulnerable breed because of their relatively low numbers.

The Lakeland Terrier won't be a breed for everyone, but enthusiasts fall in love with their spunky and fun personalities. They are known for being exceptionally brave, determined, playful and confident.

They are very bright, but they can also have a willful, stubborn or even mischievous streak. If they don't want to do something, they will not be forced into it. You may need to set up clear rules, be patient and work a little harder on their training. Their smarts mean they do respond very well to positive reinforcement training methods.

Harking back to their days watching over the flocks on the Fells, they can be a watchful breed and can be prone to noisy alert barking. You may need to put in extra training to ensure this doesn't get out of control.

The breed, while loving with their family, is certainly not a lap dog. They have bundles of energy and independence and will be best suited to an active home where they will get plenty of exercise and stimulation. They are known for living well alongside respectful children and often have jovial and playful temperaments.

While not usually aggressive towards other dogs, they do often like to be the boss, can be tough and they would not back down in a scuffle. They should receive early and ongoing appropriate socialization to help minimize the chances of them becoming dog reactive. Because of their hunting and guarding background, care would need to be taken if trying to introduce them to other animals in a household too.

While Lakelands shed very little, their coat does need regular weekly brushing to prevent mats developing. Their coat is also usually hand stripped to maintain its original qualities. If it is clipped, for ease, then the coat texture tends to change and become softer.

Regular clipping or stripping is recommended to prevent the coat from becoming too unruly. The hair around their eyes should also be kept under control to make sure they can see properly.

Lakelands come in a wide variety of colors. Wheaten is probably the most common, but they are also found in black, blue. liver, red and sometimes have tan markings too. Often puppies are born with a dark coloring, and their true markings develop as they mature

The Lakeland Terrier is known for being a very robust and healthy breed. Unusually, there are no genetic health screen tests that are recommended for breeders to conduct on prospective parents.

All dogs should be fed a high-quality and appropriately portion-controlled diet, and the Lakeland Terrier is no exception.

Obesity is one of the biggest problems in companion dogs worldwide, and it can lead to a whole host of other, often serious, health conditions. Making sure you do not overfeed your Lakeland Terrier should be a priority. 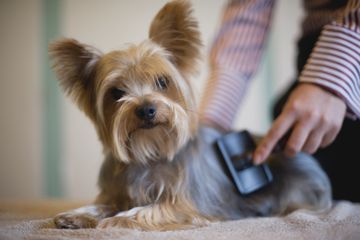 Where to Adopt or Buy a Lakeland Terrier

The Lakeland Terrier is not the most common of breeds. This could mean that you would have to be added to a breeder waiting list or you could have to travel further afield to secure a puppy.

Make sure that your enthusiasm doesn't cause you to rush into buying a puppy without doing your research. Take the time to find a reputable breeder. There are too many unscrupulous backyard breeders and puppy mills out there. Puppies from these types of sources are often poorly socialized, can have health problems and are often released to their families too early. The trade also keeps breeding adult dogs in atrocious conditions.

A good place to start your research would be to contact The United States Lakeland Terrier Club.

Given their rarity, there will not be too many Lakeland Terriers in rescue. Don't let that put you off considering adoption, though. The United States Lakeland Terrier Club has a rescue program, and there are lots of other deserving terriers in shelters across the country looking for their forever homes.

There are lots of fantastic terrier breeds out there worth considering. If you would like to know more about some similar breeds, why not check out:

Taking the time to do your research on which potential dog breeds would slot into your family and lifestyle the best is well worth the time and effort.