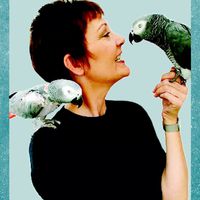 Patricia Sund
Patricia Sund is a well-known parrot expert and writer with over a decade of extensive experience focusing on bird welfare and living with parrots. She is a sought-after speaker about parrot care, writes for Bird Talk Magazine, and owns the popular website Parrot Nation.
Learn more about The Spruce Pets' Editorial Process
Reviewed by
Natasha Diehl

Reviewed by Natasha Diehl
Dr. Diehl is a passionate veterinarian pursuing specialty medicine with over 6 years' experience with exotic pets. She now works with a team of other experienced vets to provide the best advice and care for their clients' pets.
Learn more about The Spruce Pets' Veterinary Review Board

Have you ever been awakened in the middle of the night by thrashing and a great deal of commotion going on under one of your covered cages? It happened to me the other night. I heard all of this jumping around, a bell clanging and scratching of paper. I jumped out of bed, hurried to my living room and lifted one of my African Grey’s covers. Parker was on the floor of the cage and seemed distraught.

I picked him up and held him. His heart was beating hard and he seemed upset. I took him into my room, sat on my bed and just held him for a while until he settled down and began cooing. I simply talked to him softly and he was just fine after a few minutes. What happened? Well, I think it was a “night fright.”

It has happened rarely with my birds as I am fairly consistent with their care. I think the change in his cage position might have been what caused his reaction. I had swapped Parker and Nyla’s cages just for a change of view and to see if they preferred those positions. Nyla liked where she was just fine. But I don't think Parker took to his new place in the room. While it hasn’t happened ​since, this might well have been the case.

There are a few things that might cause these night frights. A perceived threat can be a noise outside, the sound of a truck, a sudden flashing light or a vibration. Any little variation in their routine can cause this. Cage not covered enough that is letting in light that changes with a flashing of car headlights? Cage covered too densely with no light emitting at all? Any of these can cause a night fright.

Cockatiels are especially vulnerable to these episodes of night frights. But it does happen with other species. I’ve had this happen a few times with my Greys over the years. Cockatiels are ground feeders and, in the ​wild, they’ve had to develop some wickedly quick escape routines. It’s a fairly dangerous thing to feed on the ground due to predators looking for a snack. So they have developed whip-fast responses to any potential threat by wildly flapping and flying for a quick escape. They travel in flocks and look out for each other and are all sentries for the entire flock’s welfare. If one perceives a threat, the entire flock will escape the area in a flash by flying out rapidly.

Parrots are prey animals and use these instincts to escape any perceived threat. However a bird in a cage and covered cannot escape. If she flies up, she’s going to hit the ceiling of the cage. These episodes aren’t fun and can be potentially dangerous.

I was fostering a beautiful African Grey named Byron for a while until he found his new family. One night the same thing occurred with Byron thrashing around his cage floor clearly upset. While this was a problem, the other issue I had to cope with was that he caused a chain reaction with the rest of my flock. Not only was Byron crashing around his cage, but our birds also responded to the noise and began doing the same thing. They took his cue to follow his lead. I was snapping on lights and whipping covers up as fast as I could to stop the thrashing. It subsided of course the minute they saw me and knew everything was okay. They calmed and quieted down and all was well with the world after I took a minute or two with each one to comfort them. They slept soundly for the rest of the night.

I have found something that helps prevent this and that is running an air purifier at night. The sound of the "white noise" of the fan seems to keep them calm and masks any outdoor noise that may disturb them.

I don’t know what caused this episode that caused Byron to have his night fright. He is a pretty secure bird and was very calm for the most part. But something as simple as not enough light or too much light with shadows can cause this in a bird. They are built to react this way and instinctively respond to these natural tendencies to flee.

Being consistent with their care and being observant of their surroundings are ways to help prevent these episodes from occurring.