Red fan parrots are some of the most strikingly colorful pet birds. They are medium-sized parrots with very vibrant feathers and a unique crest on the top of their head. These birds are not as commonly seen as pets as some other small parrots, but they can still be found in some avian enthusiast's homes.

Life Expectancy: Up to 40 years

Red fan parrots are native to the Amazon river basin and can be found in various South American nations including Brazil, Ecuador, Suriname, Guyana, Colombia, French Guiana, Venezuela, and even parts of Peru.

They nest in tree holes and spend their time in the canopies of the rainforest where they are typically found in pairs or small groups of seven birds or less.

Red fan parrots are not birds for a beginner aviculturist as they will need a lot of time, attention, and patience.

Females are usually less temperamental than males, but both sexes have dominating personalities, are creative, inquisitive, and playful. They are often compared to conures in their personalities.

While the red fan isn't the loudest of parrots, it can let out a scream or high-pitched whistle when it's upset. It can learn to mimic sounds and will make quiet murmurs or whispers, but, if it doesn't get what it wants or is upset, it will get loud.

How to Teach Your Bird to Talk 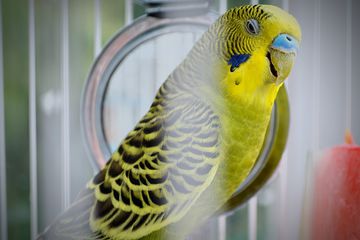 Both male and female red fan parrots have the same colors and markings, so there is no way to differentiate between the sexes by simply looking at the feathers.

The characteristic red and grey/blue striped "fan" on the top of the head is hard to miss when it's raised but will lay flat on the back of the head and neck when the parrot is not on high alert, excited, or scared. Red fan parrots are the only type of parrot other than a cockatoo that can control this crest on the top of their head.

The wings of a red fan parrot are green and the body is the same red and grey/blue striped pattern, with some green around the neck and shoulders. They have a brown and white feathered face and a black beak.

Caring for the Red Fan Parrot

Even though they aren't as large as some other parrots, red fans still need plenty of space to live. A safe flight area is ideal outside a private cage, but be prepared for this bird to rule the roost if it lives with other birds.

A red fan parrot can be demanding of attention and is known to be temperamental, so it takes a patient owner that has the time and energy to spend with their bird.

Like other birds, red fan parrots are prone to respiratory issues if they experience drastic temperature changes or drafts. Unsanitary living conditions may also lead to issues like Aspergillosis.

Like most pet parrots, a mixture of a high quality, pelleted bird diet and fresh fruits and vegetables should be fed to a red fan. Cooked chicken, eggs, some seeds, and healthy treats like sugar-free cereal, bread, salt-free crackers, cooked pasta, and nuts can be offered on occasion but should not be the bulk of the diet.

Seeds vs. Pellets: What to Feed Your Bird

Red fan parrots need lots of space to play, fly, and explore. They are very active birds and will scream if they get bored or unhappy. Puzzle toys and foraging activities for mealtime can help keep their minds occupied.

Where to Adopt or Buy a Red Fan Parrot

Red fan parrots are not common pet birds so they will rarely be found in the average pet store or at a bird rescue. These birds will typically need to be purchased from a bird breeder or ordered from a speciality bird store and can cost $1,000-$3,000.