The Sealyham Terrier, while once exceedingly popular, is now one of the rarest of all the terrier breeds. Originating from Wales in the United Kingdom, they are not as high energy as a lot of other terriers. They are known for having fun-loving personalities, but they can also be stubborn and prone to guarding.

Coat Color: Usually all white or with lemon. tan or badger markings around the ears and face

Characteristics of the Sealyham Terrier

History of the Sealyham Terrier

Originating from Wales in the United Kingdom, the breed was once one of the most popular of the terrier types. Their numbers have increasingly dwindled, however, and they are now considered an endangered breed.

The breed was created in the mid-1800s by an army captain named John Edwardes. He was looking for a small, robust and brave dog that could support his Otterhound pack in flushing the animals out of their lairs. Otters were viewed as pests that drastically decreased the fish stocks in his estate rivers.

It is thought he may have crossed breeds like the Bull Terrier, West Highland Terrier, and possibly even Dandie Dinmonts and Corgis to create the Sealyham. There are, however, no official records to confirm this.

The breed got its name from the Sealy Ham estate which was owned by Edwardes. The original breed was thought to be slightly smaller and more feisty than its modern-day counterparts. The English Kennel Club originally recognized them in 1910.

By the early to mid 20th century, the breed was extremely popular in the United States too. They were regular winners of high-profile dog shows and were favorites amongst famous movie star owners. Some well known Saley owners included Elizabeth Taylor, Alfred Hitchcock, Gary Cooper, Humphrey Bogart and even the Royal Family.

It is not really clear why their popularity waned, but they are now considered an endangered breed, despite often making good family pets.

Given the Sealyhams hunting background, it is no surprise that they are known for being brave, adaptable, spunky and full of character. They were also known for being good companions to their hunter owners, and this loyalty and affectionate remains present today too.

While they do enjoy the company of their people, they can be reserved, and sometimes even guarded with strangers. They often make excellent small guard dogs, although care should be taken not to let this characteristic get out of control. They can be noisy alert barkers and have even been known to guard prized possessions and food.

To prevent resource guarding or other problem behaviors surfacing, you should make sure that they have received appropriate socialization and training from an early age. Care should also be taken if you are introducing them to other small animals. Their hunting background means they can have a high prey drive. At home, Sealies enjoy the affection of their owners, but they are quite an independent breed too, and they can have a typical terrier stubbornness about them.

Sealies are intelligent and respond very well to gentle, positive reinforcement training techniques. You may need to put additional training work in for the likes of recall, digging and minimizing their noisy barking.

Sealies are also often known as being the clowns of the terrier world. They love to play, and can be very goofy and endearingly humorous. This is one of the traits that enthusiasts of the breed fall in love with.

Sealies have a thick double coat with water-resistant qualities. They do not shed much, but the coat can become matted and tangled if it is not brushed out regularly. Regular hand-stripping or clipping is also recommended.

They are known for the large quantities of hair that falls forward from their forehead, and it can impede their eyesight if this is not trimmed. A Sealyham Terriers coat is either completely white or mostly white but with lemon, tan or badger markings over their ears and face.

The Sealy, like many others from the Terrier Group, is generally considered a healthy breed. They do have a few inheritable conditions that they are predisposed to which include:

Sealies, are known to be foody dogs; they like their grub. This means they can have a propensity towards easily putting on too many pounds.

You should always measure out your dog's food portions, and don't encourage free feeding. This is where the food is left out and always topped up. Make sure you use healthy training treats in moderation and keep your Sealy on a regular exercise regime.

Obesity can lead to a decrease in your dog's quality of life and a host of other associated health problems. 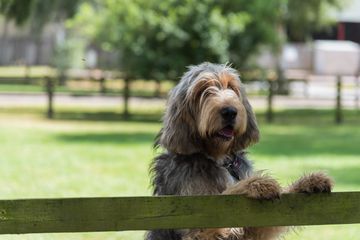 Where to Adopt or Buy a Sealyham Terrier

Because the breed is rare, it could mean that you have to go on a waiting list or travel further to secure a puppy from a reputable breeder.

The American Sealyham Terrier Club could be a good place to start your research.

While Sealies will be rare in rescue, adopting a dog is an extremely rewarding experience. The Club has a rescue branch called the Sealyham Terriers Forever Foundation who would be worth reaching out to if you would like to offer a Sealy a forever home.

If you are a fan of terrier breeds, then why not also consider one of the following types of dogs:

By doing your research on the different types of dog breeds out there, you will increase the chances of finding one that will enjoy being part of your home and lifestyle.