An alert, loyal dog, the Taiwan Dog is an ancient hunting breed that today is known for being an incredibly versatile dog as well as a loyal, devoted companion.

The Taiwan Dog is known for its triangular head and almond-shaped eyes; a sickle tail, spotted tongue, and pricked ears also make this breed unique in appearance. The Taiwan dog's origins are as a self-sufficient hunter, but today they are used as guard dogs, search-and-rescue, and even stunt dogs.

Characteristics of the Taiwan Dog

History of the Taiwan Dog

Also known as Formosan Mountain Dogs, the Taiwan dog's roots trace back to between 10,000 and 20,000 years ago as a loyal companion to ancient hunters in the wild forest. They were also used by Taiwanese indigenous people to hunt small game as well as wild boar. The Taiwan dog is well-adapted to the thickly forested terrain of its native country, and was once a semi-wild breed.

They are descendants of South Asian hunting dogs that were indigenous to the central mountainous regions of Taiwan. They are considered to be one of the oldest dog breeds in the world.

As such, the ancient Chinese breed has remained an integral part of Taiwan’s historical and cultural landscape, and they remain very popular across the island. They are often used as both a watchdog as well as a trusted family companion, but their versatility means that they are also sometimes called upon as working dogs (rescue dogs, stunt dogs, etc.). They have also been considered as military dogs.

These dogs are extremely agile and became known for their hopping skills while hunting small animals like rats; they will hop back-and-forth sideways when they trying to intimidate their target. The Taiwan dog also will not hold its bite on their target as a result of its behaviors during early boar hunting; instead, they would attack repeatedly to exhaust the animal long enough for their master to move in for the final kill.

In 1980, scholars from National Taiwan University, Japan Gifu University, and Nagoya University carried out a cooperative study focused on the native Taiwan Dog. As part of the study, the teams of researchers visited 29 communities of local inhabitants to confirm that the modern day Taiwan Dog is a descendant of South Asian hunting dogs.

Though they are a popular breed in Taiwan, these dogs have also gained popularity in the United States thanks to rescue efforts that have brought abandoned Taiwan Dog mixed breeds overseas. The purebred Taiwan dog remains extremely rare, and are generally kept for conservation efforts in their native country.

These dogs are incredibly in tune with their masters, probably thanks to generations of collaboratively hunting small game in the mountains. As a result, they are easily trainable and incredibly responsible to commands.

The Taiwan Dog also makes an excellent watchdog, as they are generally wary of strangers and are truly fearless when it comes to protecting their families. Of course, that also means that proper training and socialization are a must for this breed. When they find themselves in unfamiliar situations, they can become intimidated by new people and sounds and can become fear-aggressive. They will be friendly with other people and pets when properly socialized, although as a family pet they tend to form a stronger bond with one member of the family and can be somewhat stand-offish with others—so they are sometimes described as one-person dogs.

The Taiwan Dog will be happiest when they are able to spend a lot of time with their owners, as they thrive with daily interaction and socialization. This breed should also receive ample exercise as well as lots of opportunities for mental stimulation with various games. They are happy playing in the backyard or taking walks outdoors, but they will also gladly play hide-and-seek, fetch, or learn new tricks during indoor playtime. They are also known to enjoy outdoor activities including swimming, hiking, or retrieving balls or Frisbees, and they excel in dog sports such as obedience, rally, and agility.

The Taiwan Dog won't require a great deal of grooming due to its short, two-layer coat. They will need a weekly brushing and just an occasional bath, and of course proper dental care is always recommended, as are routine ear checks to avoid a buildup of wax and debris and prevent infection. Their nails can be trimmed on an as-needed basis with a nail clipper or grinder.

The Taiwan Dog is a generally healthy breed. Like most dogs, they are susceptible to some age-related degenerative conditions.

The Taiwan dog should do well on any high-quality dog food, whether it's commercially prepared or cooked at home with the guidance of your veterinarian. Be sure to look for a food that's specially formulated for small- to medium-sized high-energy breeds to ensure that your dog is eating a biologically appropriate food containing protein and healthy fats.

10 of the Healthiest Dog Breeds 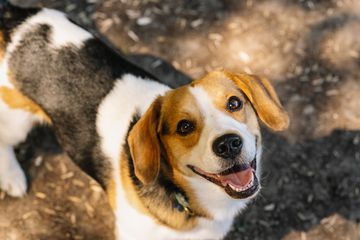 Where to Buy or Adopt a Taiwan Dog

Though the Taiwan dog is much more prevalent in its native country, it's always possible to find this breed (or, more likely, a mixed Taiwan dog breed) who needs a home in your local shelter. You can also contact Taiwan Dog rescue organizations.

When determining if the Taiwan dog is the right dog for your family, be sure to research all aspects of the breed and consult other Taiwan dog owners as well as breeders and rescue groups to learn more. In the meantime, you can also check out these other dog breeds:

There's a wide array of dog breeds out there. With a little research, you can find the right match for your family.