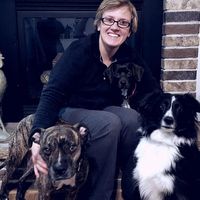 Lori Rockwell
Dr. Lori Rockwell, DVM is a veterinary expert with 15 years of experience in general practice, emergency medicine, and shelter medicine. She has several certifications, including Fear Free and Low Stress Handling and Restraint, and she is a certified canine rehabilitation therapist.
Learn more about The Spruce Pets' Editorial Process
In This Article

Because red blood cells help transport oxygen to cells and tissues throughout the cat's body, if the red blood cell count drops quickly or gets very low, the cat will show signs of oxygen deprivation, which can include lethargy, pale gums, increased heart rate, and difficulty breathing.

Although the outlook for anemic cats depends on the underlying condition, most cats will recover with treatment and go on to lead normal and happy lives.

Anemia is a common blood disorder not just in cats, but also in dogs, humans, and many other animals. An anemic cat or other animal has too few red blood cells circulating in its blood, or too little hemoglobin within its red blood cells. Hemoglobin, a type of protein, is the component of red blood cells that binds to oxygen and carries it to the cells throughout the body.

Symptoms of Anemia in Cats

Symptoms of anemia can vary based on the underlying issue that's causing the problem, but there are some general symptoms to watch for. Two of the most common signs of long-term anemia in cats are lethargy—you'll notice your cat seems more tired than usual, or isn't interested in things that it used to enjoy doing—and pale gums.

If you take a peek into your anemic cat's mouth, you'll probably notice that its gums are paler than normal, and may appear almost white. This is due to a lack of red blood cells.

An anemic cat's heart rate also increases in an effort to get oxygen to the cells that need it. You might see your cat's breathing rate speed up in an effort to bring more oxygen into the body. Most likely, your pet will appear lethargic and won't be as interested in playing, grooming, or socializing as usual, as reduced oxygen levels leave muscles weaker than normal.

Some cats also lose their appetite when they're anemic and may drink more in an effort to replace lost blood volume. In severe cases, when a cat has lost a lot of blood, it may be unable to move or can become unresponsive due to a lack of oxygen to the brain.

If your cat is showing any of these symptoms, it should be evaluated immediately by a veterinarian.

The diagnosis of anemia in cats is fairly straightforward. A blood test called a complete blood count (CBC) is the basic test used for evaluation. There are several components to a CBC. One is a count of white blood cells, which can be useful in diagnosing infections. However, it's the tests evaluating the red blood cells that are of most interest when a cat has symptoms of anemia.

Hematocrit: One component of the CBC is the hematocrit, which measures what percentage of a blood sample's volume is red blood cells. Normally, this should be around 25 to 45 percent, although different laboratories can have slightly different ranges. If the hematocrit is below 25 percent, a diagnosis of anemia is made.

Hemoglobin: This is another important component of the CBC. This test measures how much hemoglobin the red blood cells contain. It's also usually low in an anemic cat. A typical normal range for cats is 9-15.6 g/dl.

Additional blood tests: Your veterinarian will probably also run other blood tests to check for your cat's overall health condition, as well as specialized tests to determine or rule out kidney disease and infectious diseases such as feline leukemia virus (FeLV) and feline immunodeficiency virus (FIV) because these viruses are frequent causes of anemia.

Fecal test: A fecal test will often be performed to check for intestinal parasites causing internal blood loss, as well. Occasionally, your vet might want to use a long needle to draw a sample of bone marrow to determine if the problem is due to a disorder of the marrow.

If the cat's anemia is severe enough to be life-threatening, an emergency blood transfusion and supplemental oxygen are usually required. For cats with mild to moderate anemia, however, treatment will focus not on the anemia itself, but on the underlying condition causing the problem. Your veterinarian will determine the necessary treatment for your cat's specific condition.

Prognosis for Cats With Anemia

Because there are so many underlying causes for anemia, it's difficult to generalize about the prognosis, but for most cats with mild anemia and simple underlying issues, the prognosis is quite good. For cats that have suffered severe trauma, however, or have ingested toxins, have cancer, or are in late-stage kidney disease, the prognosis is much more grave.

How to Prevent Anemia

Anemia is a symptom of many diseases, so preventing anemia is not always possible, but there are some specific things you can do to decrease the risk for your cat.