Hamsters are known to be cute, pint-sized pets that spend their days running in wheels and adorably stuffing their faces with pellets. While these traits are a major draw to owning one of these fluffy buddies, they can have some primal moments that aren't as warm and cuddly as their appearance. One such moment involves...well, occasionally eating their young. Whether you've seen it firsthand or noticed baby hamsters mysteriously disappearing, the experience is upsetting and confusing. There are a few reasons why this shocking behavior may occur, plus ways you might be able to prevent it from happening in the first place.

Female hamsters will begin to prepare a nest in anticipation of the arrival of their babies. A hamster is pregnant for only about three weeks and up to 20 babies can seemingly appear overnight in a hamster's nest if you didn't know your hamster was pregnant. Hamsters will use soft material to make a comfortable nest for their offspring, often making use of tissues, paper towels, shredded paper, and the cage substrate. Sometimes, food is even kept in or around the nest.

Hamsters will eat more when they are pregnant and nursing, but otherwise their diet will remain the same as if they weren't. Seeds, fruit, vegetables, and pellets remain staples in a hamster's diet during pregnancy. Occasional treats are okay, but fresh water should always be available.

Reasons Why a Hamster Would Eat its Babies

If a hamster has prepared for a normal birth by nesting and eating a little more food than usual, then it can be especially surprising to see a hamster kill and eat its own baby. But while a lack of food may be the reason this occurs, there are a few other reasons why a hamster may eat its babies.

Is Your Hamster Spayed or Neutered? 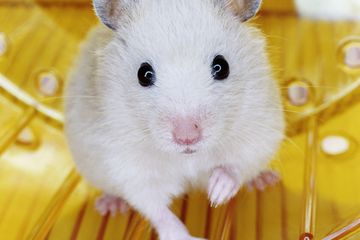 How to Prevent a Hamster From Eating its Babies

There are a few easy ways to help prevent a hamster from eating its babies.