The Yakutian Laika is a rare spitz breed that’s been prized for centuries in Russia as a sled dog, hunting dog and all-around family companion. Spitz breeds (sometimes called Northern breeds) are a type of dog known for their characteristic wolf-like appearance, including a wedge-shaped head, triangle-shaped upright ears, long tail that curves over the back, and thick double coat.

The Yakutian Laika has always been treated more as a companion than strictly a working dog, so they evolved to be extremely friendly toward humans, especially their own family, including respectful children. However, they may be wary of strangers initially until they get to know them or understand that they are welcome. The Yakutian Laika has a high prey drive, so shouldn’t be trusted with small pets, though they might learn to live peacefully with a family cat.

Height: 21 to 23 inches tall at the shoulder

Color: White and any patching (bicolor or tricolor).

History of the Yakutian Laika

The Yakutian Laika is an ancient dog breed that was bred by aboriginal people living in North-East Russia at least since the 1600s, but possibly for thousands of years. It was loosely bred for centuries, but by the end of the 20th century, the breed’s numbers dwindled to dangerously low levels, putting it at risk of disappearing forever. A group of Russian breeders passionate about the breed revived it in the late 1990s, using the first breed standard developed for the “North-East Sled Dog,” which was written in 1958. In 2004, the breed was accepted by the Russian Kynological Federation.

The Yakutian Laika is not yet recognized by the primary all-breed kennel clubs in North America (the American Kennel Club, Canadian Kennel Club and the United Kennel Club), but it’s part of the AKC’s Foundation Stock Service, which is a stepping stone toward eventual full recognition. It is recognized internationally by the Fédération Cynologique Internationale (FCI).

Like most dogs bred to pull sleds, the Yakutian Laika has abundant energy, stamina and drive. They need a lot of daily exercise and mental stimulation to keep them from becoming bored, restless, and, as a result, destructive. Long walks are nice, but running, hiking, and tossing the Frisbee or ball are great options. If you live in an area that gets snow, Laikas can easily be trained to pull a sled—something they excel at and love to do. They may also enjoy training for a competitive dog sport like agility.

Though the Yakutian Laika likes to please its owner, the breed can be fairly independent and may be more challenging to train than some breeds. It’s best to use positive training techniques and to demonstrate to the dog that you are a fair and consistent guardian. Treats go a long way toward achieving success. Early socialization in puppyhood is important to help the Laika grow up to be confident and accepting of strangers.

The Yakutian Laika’s fluffy coat is relatively easy to care for. No trimming is required and the coat naturally looks and feels clean with only occasional baths as the hair naturally repels dirt.

The breed sheds a little most of the time, but “blows coat” (loses much of the undercoat) seasonally, during which time shedding becomes quite heavy. Brush daily during these times to remove as much hair as you can. Outside of these shedding periods, brushing a few times a week is usually sufficient.

Trim the nails every two weeks (less often if the dog naturally wears them down by exercising outdoors) and look inside the ears weekly to make sure they don’t look red or inflamed. If dirty, clean the ears with a pet ear cleaner.

The Yakutian Laika is an exceptionally healthy breed and experiences few serious genetically inherited disease. That said, like all purebred dogs, the breed may develop certain health conditions, including hip and elbow dysplasia and some eye conditions.

To keep the breed as healthy as it can be, reputable breeders test their adult stock prior to breeding them to make sure they are at lower risk for these conditions so they don’t pass them on to puppies.

Like many larger, deep-chested breeds, the Yakutian Laika is also prone to gastric dilatation-volvulus (also known as bloat).

Some Yakutian Laikas, especially those that are highly active, may need to eat an energy-dense, high-quality food so they consume enough calories to support their level of activity. Others may be less active and require a lower-calorie diet to avoid becoming overweight or obese.

Dogs that weigh too much can develop or worsen joint disorders like hip dysplasia, elbow dysplasia and arthritis, and obesity can lead to other health issues like diabetes.

If you’re not sure what to feed your Yakutian Laika, or how much to feed, talk to your veterinarian or breeder for advice. 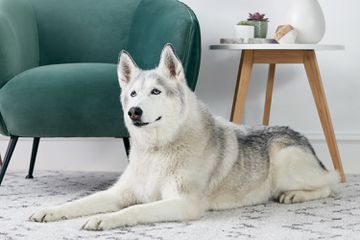 The Yakutian Laika is extremely rare, especially in the United States, and is not yet recognized by any of the main kennel clubs in North America. If you have your heart set on acquiring a Yakutian Laika puppy, it might be a difficult prospect.

The Yakutian Laika Club of America, which is the parent club for the breed in the United States, maintains a directory of U.S. and Canadian breeders on its website, so this would be a great place to start your search.